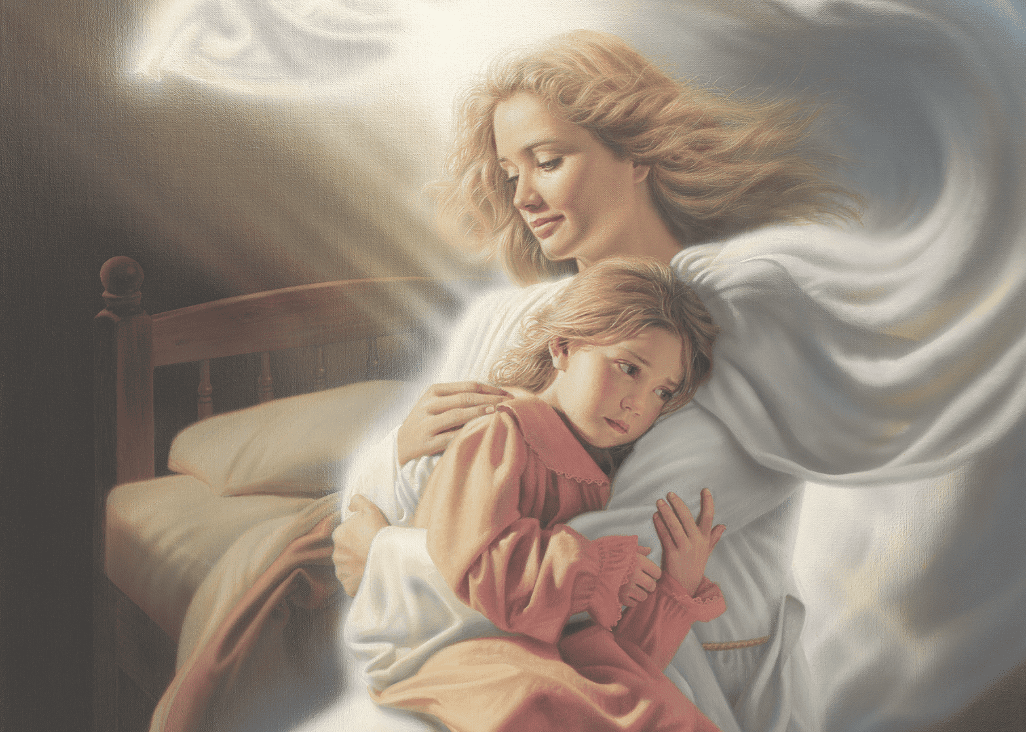 Children are our most priceless treasures, and we want to protect them at all costs.  Sometimes children get in a situation where they are in harm’s way.  When we can’t be there, or can’t help them, angels are often sent to succor and assist our little ones.

When my son Gary was about 18-months-old, he somehow finagled a way to open our locked and bolted back door and started toddling away from our home without me knowing.  We lived one street over from a very busy highway.

I was occupied in a back room when I got a knock at the door.  When I opened the door, I saw an unfamiliar woman standing there holding Gary’s hand. She was tall and stately. I was astounded because I hadn’t even noticed that he was gone.

She simply said, “Your son was out walking on the highway.”  I took his hand while my mouth was hanging open.  I quickly thanked her and then took him inside embarrassed and horrified for what could have happened. I began to wonder, “Who was that woman?”  How did she know Gary was my son?  How had she found me?  She was dressed differently from people where I lived.  I looked out the window to get a better view of her, and she was gone.  I was suddenly struck with the awareness that she had been an angel…

Angels That Are Assigned to Children

I love the scripture that talks specifically about children’s angels:

“Take heed that ye despise not one of these little ones; for I say unto you, That in heaven their angels do always behold the face of my Father which is in heaven.”[1]

I have collected several first hand accounts of children who, even during abuse or trauma, see and feel angels helping them.  Here is one that is truly inspiring.

Children Being Sustained from Evil

A woman told me about an experience she had as a young child where an angel sustained her through a very traumatic event.  She wrote,

“When I was very young, between the ages of 5 and 6 years old, I was in a situation that would be described as very unfortunate. A few years ago, as I reflected on that memory one day, I had what I believe was revelation regarding this incident. I could see myself and another little fellow who was also present, and we were suffering and scared, along with other people not far from us. Suddenly, I recognized that there were several angels ministering specifically to the two of us. They were very near, right next to us, and I knew that they were nursing us, so to speak, in the midst of these circumstances.

“As I saw this revelation, I instantly also perceived that the angels’ time—God’s time—was not the same as our earthly time. With the activities going on around me, the angels were in a space unlike ours here on earth, yet they were very close to us, busily protecting us and guarding our spirits. From that point on, I have known that the spirit world is right here among us, even though we cannot see it. There are angels and spirits engaged in our lives to various degrees. I now often pray specifically for their assistance in my life and those around me and know they are here for us. It is such a comfort to me, and I’m positively sure they are helping God’s children all over the world to endure their trials and struggles. Heavenly Father does not leave us alone—ever.”[2]

Her insights are inspiring.  Angels are given assignments to help children through many storms; sometimes these storms are literal, as in the following account.

Elder Rasband taught: “While in Oklahoma, I had the opportunity to meet with a few of the families devastated by the mighty twisters. As I visited with the Sorrels family, I was particularly touched by the experience of their daughter, Tori, then a fifth grader at Plaza Towers Elementary School.

“Tori and a handful of her friends huddled in a restroom for shelter as the tornado roared through the school. Listen as I read, in Tori’s own words, the account of that day:

‘I heard something hit the roof. I thought it was just hailing. The sound got louder and louder. I said a prayer that Heavenly Father would protect us all and keep us safe. All of a sudden we heard a loud vacuum sound, and the roof disappeared right above our heads. There was lots of wind and debris flying around and hitting every part of my body. It was darker outside and it looked like the sky was black, but it wasn’t—it was the inside of the tornado. I just closed my eyes, hoping and praying that it would be over soon.

‘All of a sudden it got quiet.  When I opened my eyes, I saw a stop sign right in       front of my eyes! It was almost touching my nose.’

“Tori, her mother, three of her siblings, and numerous friends who were also in the school with her miraculously survived that tornado; seven of their schoolmates did not.

“…That weekend the priesthood brethren gave many blessings to members who had suffered in the storm. I was humbled to give Tori a blessing. As I laid my hands on her head, a favorite scripture came to mind: “I will go before your face. I will be on your right hand and on your left, and my Spirit shall be in your hearts, and mine angels round about you, to bear you up.”[3]

Angels can safeguard children from danger as well as to aid in their healing.  In Psalms it states that, “…he shall give his angels charge over thee, to keep thee in all thy ways.”[5]

Sometimes it’s the mothers of sustained children that see or feel the angels.

Sherry Bonneau shared a very touching story where an angel was sent to save her baby.  Since birth her 2-year old son Richard, had battled severe health problems and nearly died on several occasions. One day, on a holiday weekend, when no doctors were scheduled at the facility, Richard had a very bad reaction to the sedation he just received for a biopsy, and all the alarms were going off.  She writes,

“His fever was 105 and he barely had a pulse. I knew he was dying. I pleaded with Heavenly Father that surely he hadn’t allowed Richard to survive all the other near deaths, only to take him now!

“As I looked up with tears running down my face an unfamiliar doctor was in the doorway.  He asked me a couple of questions and then turned to the nurse and told her to open his IV wide open and run two bags of this medication through. Once the first bag went through, his temperature started to come down and his blood pressure started coming up. The alarms stopped ringing. By the time the second bag went through my son was fully awake.

“I looked up to thank the doctor, but he wasn’t there. I asked the nurses to tell me who he was.  When they checked, they discovered that he didn’t sign the logbook and no one saw him pass the desk on his way in or out. The only nurses who actually saw him were the ones in our room that had been instructed to save my baby’s life.”

“I know Heavenly Father sent the angel doctor that day, and I will be forever grateful.”[6]

Angels are given the beautiful authority to oversee children and shield them from the worst things in life, or if they must go through the trial, angels are often allowed to support them through it.

Children’s angels are in the Presence of the face of God, and are especially equipped to protect little ones.  Someday we’ll have the full report of how we were protected and sustained as children by our angels.  What a revelation of God’s grace that will be.

[4] Ronald A. Rasband, “The Joyful Burden of Discipleship” April Conference, 2014.

My three year old brother, George, was prepared for his death by an angel. She came to him several times before our house burned down and he died in the fire. The night before he died he told me that she had visited him and told him she was going to take him to Heaven. He had been there a few months earlier when he drowned, but was brought back by an older brother giving him CPR. The night before he died in the fire, he talked to me about what Heaven was like and that he had his own white horse there. He had told others in our family of his angel, "Maralee - you know, the one who sings so pretty."

I believe! I am raising my grandson and he once asked, "Why are there so many angels around the temple?' It was in Manti during the week of the pageant. As we talked about the angels and what they were doing, I asked him what he knew about angels. He said, "The ones dressed in white surround me when the ones dressed in black are near by." And before I could ask him any more about it, he ran off to play with the dog. Tears of gratitude and love still fill my eyes.