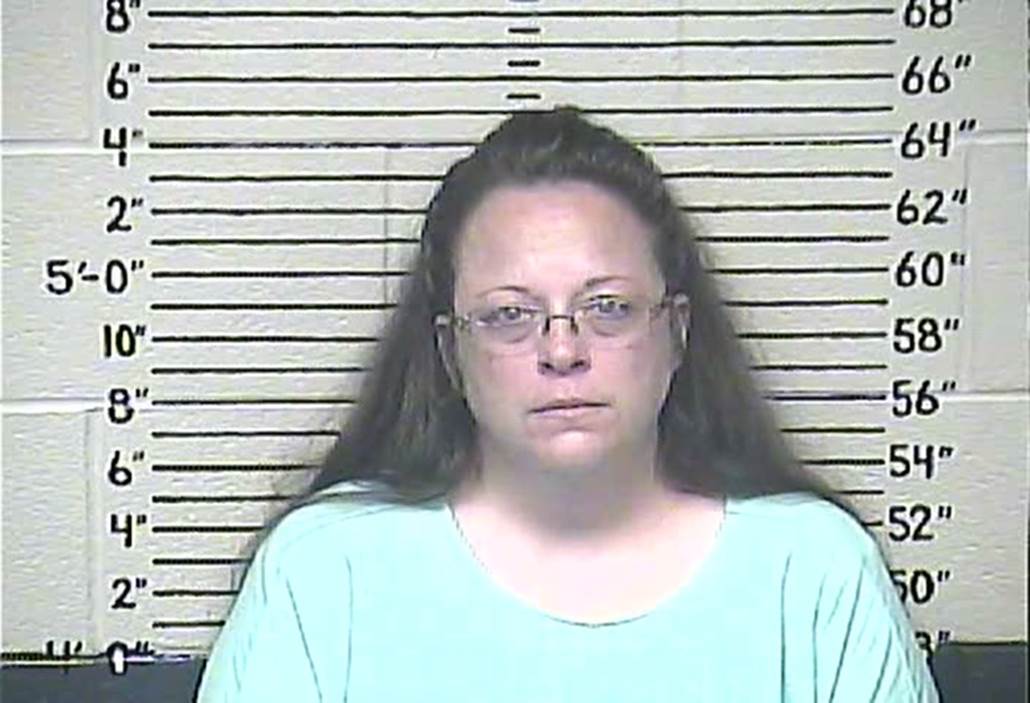 Religious conservatives who are against same-sex marriage have responded in different ways to Kim Davis, the Kentucky clerk who went to jail rather than issue marriage licenses under her name to same-sex couples. Some believe that as a government employee, she is obligated to execute the law. The argument goes that if public officials start to flaunt the laws they don’t agree with, we undercut the rule of law. The order of society rests on our living by the rule of law.

It is ironic, however, that she was put in jail for this while we see public officials regularly ignoring the law. Examples include President Obama’s justice department refusal to defend the Defense of Marriage Act (DOMA) and the governor and lieutenant general of California refusing to defend their own constitutional amendment protecting marriage. This, while being sworn as part of their taking office, to defend the law.

The Editors of the National Review take a different stance.

Kim Davis is out of jail, but she never should have been there to begin with. In late June, the U.S. Supreme Court required all states to recognize same-sex marriage, putting Mrs. Davis, head clerk of Rowan County, Ky., in a difficult position.

In Kentucky, marriage licenses bear the name and invoke the authority of the head county clerk, making Mrs. Davis, in her view, a participant in a union to which she objects on religious principle. One day after the Court’s ruling, she stopped issuing marriage licenses entirely. A lawsuit followed, charging her with violating the law as interpreted under the Supreme Court’s ruling.

A federal court directed her to issue all licenses, notwithstanding her objections. When she refused, U.S. District Judge David Bunning held her in contempt of court, and, rejecting several less spectacular alternatives, ordered her to jail. The Supreme Court rejected her appeal.

The sequence of events that led to Mrs. Davis’s imprisonment was predictable and entirely avoidable. The Supreme Court’s decision to assume to itself the ability to redefine marriage circumvented the legislative process by which accommodations for conscientious objections could have been developed. By redefining the responsibilities of public officials such as Mrs. Davis without offering protections of conscience, the Court foreordained clashes such as this.

States can and should find ways to accommodate public officials with religious objections to facilitating same-sex marriages. The United States has a long history of accommodating conscientious objectors, among them public officials. The coercive binary on offer from Ms. Davis’s critics — that she issue marriage licenses to same-sex couples or resign — is a false choice.

Bill, you referenced 1 Cor. 19:27-29. Your finger slipped and hit the 9 instead of the 0. There is no 1 Cor. chapter 19. 1 Cor. 10:27-29 deals with what you mentioned and as I mentioned, it condemns the idea that the moral/religious beliefs of some can justify the limiting of rights for others. D&C 134:4, as you mentioned, likewise condemns this idea. This is why the clerk is in the wrong and not following the Bible. This is why supporters of Prop. 8 in California, especially us LDS, were likewise opposing scriptural mandates.

Gary, at the risk of striving over the interpretation of scriptures, may I suggest the following: 1) 1 Cor. 19:29, if you read 27-29 it is clear that one following Christ should not feel intimidated by peer pressure to partake of meat offered in sacrifice to idols. 2) D&C134:4 - I believe there is some ammunition for your argument here, but verse 5 says, ". . . We believe that all men are bound to sustain and uphold the respective governments in which they reside, WHILE PROTECTED in their inherent and inalienable rights by the laws of such governments . . ." I'm not sure I would have chosen the path she chose; as unjust as this Supreme Court opinion is, she probably should have resigned. I admire her courage, however to stand up for what she believes. The point of the article however was that the judge didn't have to jail her; there were other less onerous courses that could have been taken.