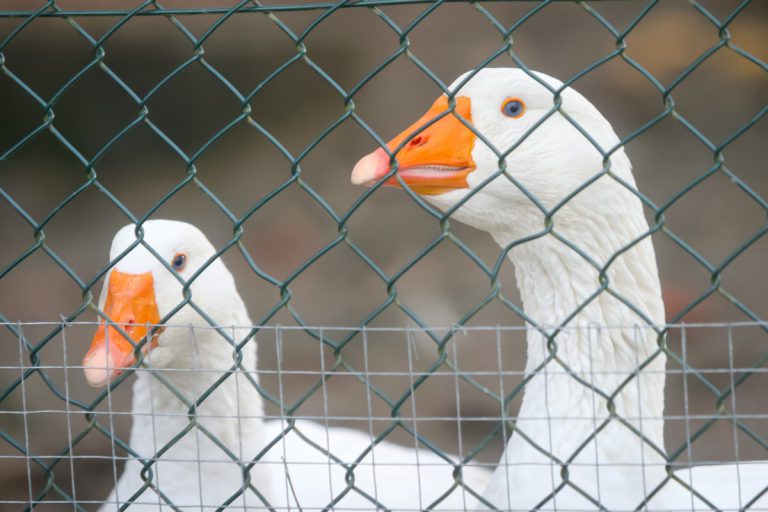 When I came home, my oldest daughter came to meet me. “Daddy, you have to do something about the geese. They think they’re dogs, and they chased us when we came home from school today.”

The previous year, my children had thought it would be fun to have a whole menagerie of animals. They especially wanted chickens so they could gather eggs. We looked through the poultry catalog together and ordered a mixture of baby chicks, ducklings, and a couple of geese. We raised them through the spring, and by late summer our chickens were laying eggs, our ducks were swimming up and down the ditch, and our geese thought they were dogs.

The problem was, when we got the birds, the geese were too bossy and didn’t get along with the chicks or the ducks. We ended up having to put the geese in the yard with our new puppy. But the puppy did what puppies do. He started chasing cars, and the geese followed suit. When someone would pass our yard or come to visit, he would bark at them. The geese, of course, picked this up, too, honking at people. However, their honking sounded more like barking. They drank milk and ate dog food out of the dog dish, turned their noses up at grain, and chased the cats.

It was cute when they were small and fluffy and the cats ignored them, but they didn’t stay that way very long. Soon the geese were grown, and it wasn’t funny anymore. Dog food costs more than grain, the cats grew afraid of them, and the geese became bossier, even barking at us.

But the day I came home and learned that they had threatened my children, I knew the geese had to go. I didn’t want to kill them, so I let everyone in our community know that I had a couple of free geese that thought they were dogs. It wasn’t too long before a middle-aged couple, who lived a couple of miles away, called and said they would like them. They lived on a corner of a country road that few people traveled, and they felt the geese would be happy there.

My next job was to catch the geese. I went outside, and the geese came after me. I thought that would make them easy to catch. But when I didn’t run from them like my children did, they suddenly didn’t want to chase me anymore. The tables were turned, and they ran. It was definitely the proverbial wild goose chase. I fell in the ditch, ripped my pants on a fence, and slid on some dog and goose poop on the lawn. But I finally got one cornered, and when it tried to rush past me, I tackled it.

Seeing his mate in trouble, the second goose came after me, flapping his wings and barking. At the last minute, since I didn’t flee, he turned to run, but it was too late for him. I held his mate with one arm and grabbed him with the other. I stuffed them, fighting and scratching, into a couple of gunny sacks.

My neighbors locked the geese in their barn for a couple of days, feeding them dog food and getting them used to the fact that this was their new home. A couple of weeks passed, and I asked my neighbor how he liked the geese. He said he loved them. After their run-in with me, the geese no longer chased people, even though their car chasing had intensified.

“There are only a couple of things I don’t like,” he said. “First, they chase my cat. And second, after word got out about our watch dog geese, our road, which had been very quiet, has become quite the thoroughfare. There is a constant stream of traffic coming to see our barking geese chase cars.”

I decided to check it out for myself, so I drove down his road, watching for the birds. As I approached the corner where my neighbors live, I couldn’t see the geese anywhere. Then, suddenly, they came rushing out after me. They had been waiting in ambush, one behind an old pickup, and the other, on the opposite side of the road, behind a lilac bush.

They chased me down the road, then they went back home to terrorize the cat and eat their dog food.