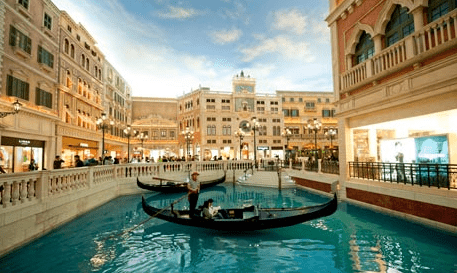 A Singer on the Las Vegas Strip Joins the Church‏

In September of 2001, I was working as a singer on yet another cruise ship.  I had spent most of my life in the entertainment business, singing and acting on various cruise ships around the world, performing in plays and musicals or at a variety of theme parks on different continents.  As one might do, I made many, many bad choices during this period of my life.

One morning, after another night of bad choices, I found myself staring in the mirror, unhappy with the man I saw reflected in the mirror.  I had always had a belief in Jesus and God. I knew I wasn’t living my life in accordance with those beliefs.  I knew I had to change. I just didn’t know how.

When that job ended in April of 2002,  I returned to my “Day Job” as a singing gondolier at the Venetian Hotel & Resort in Las Vegas.  I was helping to train a new group of gondoliers to row the gondolas on the river that winds through the hotel.  In that group of “trainees” were several Mormons.  I didn’t know this at the time, but several had recently returned from serving their LDS missions.  I could see something different in them.  They appeared to be what I had always imagined Christians should be.  They didn’t just have beliefs, they lived them.  I was impressed.  They seemed to have a special glow around them, even on the Las Vegas Strip where we worked.

As I got to know them better, I found out that they were “LDS.”   This didn’t matter to me, I just thought they were great people and I liked hanging out with them.  I enjoyed that we could talk about religion without anyone getting offended or “weirded” out.  They were clean cut, polite, and avoided off color jokes and inappropriate language.

We used to go to lunch each Saturday at a different restaurant.  One Saturday, I said, “Growing up, I’ve heard some crazy things about your church.  They can’t all be true.  Is there anything I can read about how it all got started?”  They laughed and soon I was gifted with a copy of the Book of Mormon, Our Heritage, Truth Restored and a pamphlet with Joseph Smith’s testimony of his “First Vision.”

I have to say, once I started reading, I couldn’t stop. I’m not much of a reader, but it just rang true. As I am fond of saying, “It just made sense!”  A couple of Saturdays later, one of the guys brought a couple of missionaries to our usual lunch.  I thought it was great to have them there.  I was fascinated that they would give two years of their young lives in service of their fellow man and God.  As we were eating and chatting, they mentioned the “Discussions” and wondered if I wanted to know more.  I said, yes!

We met twice a week, for 3 weeks.  And a week after that, I was baptized.  It was September of 2002, one year after my day of reflection of how I could change my life.  It is very clear to me, now, that God was preparing me for this.  Little did I know that when I moved to Sin City, God was preparing me to find the fullness of the Gospel of Jesus Christ as a singer in Las Vegas.  I still work with several of these LDS singers, although now we work together in the insurance business.

After so many years of bad decisions, I finally made the BEST decision of my entire life.  I am so grateful that my friends saw past my bad decisions and loved me enough to share the Gospel with me.  They loved me as I was but knew I could become so much better.  The atonement allows even those as I, to still be saved.

I testify that The Church of Jesus Christ of Latter-day Saints is God’s true church restored to the earth through the prophet Joseph Smith.  I know that President Thomas S. Monson is our prophet, today.  Jesus Christ died for our sins and lives again, today.   The only way to return to Heavenly Father is through Him.

It's amazing how people believe you need to serve a full-time LDS mission to be a missionary. As this article so wonderfully illustrates, this is not so. I served a full-time LDS mission in Charlottle, NC and have amazing memories and relationships I will cherish for eternity. Yet, every Latter-day Saint can be a missionary by their example and as the scriptures teach, "letting your light shine". I love sharing the gospel in every season of my life. The Lord places prepared people in your path. People that are honestly seeking a different and better life. "He is the way and the life". Best wishes as you continue your journey and your conversion will strengthen as you share the gospel with others.

This was a beautiful story and written marvellously! What an uplightful few minutes spent :) Oh, and thanks for not judging the Church based on speculation and instead going to the source. Makes so the difference, huh!