A Prophet’s Example of Working through Depression | Meridian Magazine 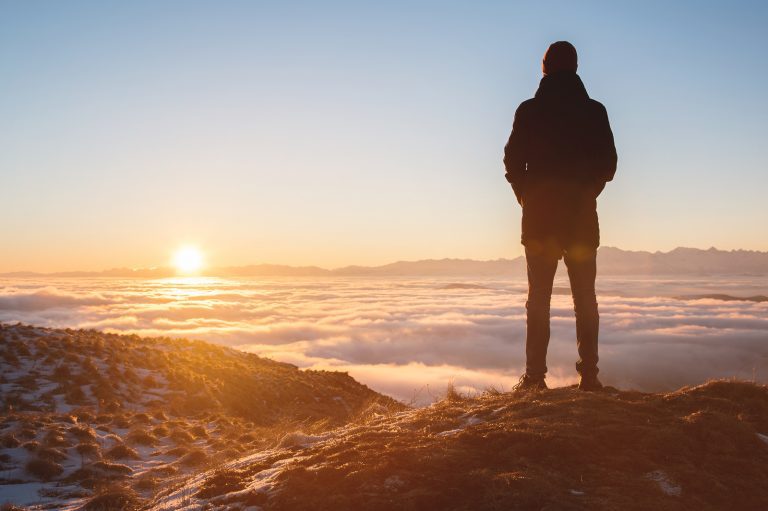 A Prophet’s Example of Working through Depression

Moroni, son of Mormon, is a man of impressive credentials by any standard. He was the last prophet/historian to engrave on the gold plates. With his own hands he buried the future Book of Mormon in the Hill Cumorah. As a glorious resurrected man sent from the presence of God, he tutored Joseph Smith for four years before entrusting him with the plates.

John the Revelator saw him in vision: “And I saw another angel fly in the midst of heaven, having the everlasting gospel to preach unto them that dwell on the earth, and to every nation, and kindred, and tongue, and people” (Revelation 14:6). Due to his pivotal position in history, Moroni is honored in gold atop temples from Accra, Ghana, to Adelaide, Australia, and from Albuquerque, New Mexico, to Asuncion, Paraguay.

Yet, in living real life, Moroni experienced seasons of fear, anxiety, and loss. He empties his heart in the first ten verses of Mormon chapter eight:

Can you see him in your mind, disconsolately scratching out his sorrow-filled heart on the plates? His anguish for father, family, and friends—all of whom suffered violent deaths—is beyond measure. In his aloneness, he doesn’t care where he goes or how long he lives. Yet somehow, someway, despite all opposition, adversity, and personal loss, he receives strength. He finishes chapters eight and nine of his father’s book, finds ore and makes new plates, abridges the fifteen chapters of Ether, inserts his own testimony of faith, and writes his own book with its ten chapters of instruction and testimony.

How could he, depressed as he was, gird up his loins, fresh courage take to such an astonishing degree? From the eighth chapter of Mormon to the end of the Book of Mormon, Moroni teaches, by example and word, his nine-step course in how to overcome anxiety and depression that are the result of loss and fear.

1. He recorded his feelings and documented his situation, establishing a baseline for him to remember his low point and to measure his healing.

2. At some point he realized he needed to stop rehearsing the awfulness of his situation: “I make an end of speaking concerning this people” (Mormon 8:13).

5. He accepted comfort and took courage from others’ words. He remembered his father’s words: “My son, be faithful in Christ” (Moroni 9:25). He recalled being visited by the Three Nephites: “Behold, my father and I have seen them: and they have ministered unto us” (Mormon 8:11).

7. He translated the Jaredite plates and found a compatriot in the prophet Ether who also watched a civilization destroy itself. Moroni must have felt kinship when he read Ether’s words: “Whether the Lord will that I be translated, or that I suffer the will of the Lord in the flesh, it mattereth not, if it so be that I am saved in the kingdom of God” (Ether 15:34).

8. He forgave and found purpose. In Moroni 1:1, he reported that the Lamanites were trying to kill him, but three verses later he explained that his purpose in writing was to write something that “may be worth unto my brethren, the Lamanites, in some future day” (Moroni 1:4).

When I feel alone or forsaken and start spiraling into negativity, I try to think about which of Moroni’s principles of emotional wellbeing will help.

1. I can do what Moroni did. I can spill out my heart in a journal.

2. I can do what Moroni did. I can stop talking about my loss, disappointment, and hurt. I don’t know if this is normal, but when something really bad happens, I want to tell everyone. About five years ago our family experienced a tragic accident. For months I told everyone who would listen—extended family, friends, clerks in stores, telemarketers on the phone, strangers on the street, reliving the shock over and over. At some point I realized I was stuck in a destructive pattern. I was perpetuating the grief and not moving toward acceptance or healing.

3. I can do what Moroni did. I can gather courage by remembering strengths of my earthly parents and ancestors. My father was a World War II veteran. My mother served others every day of her life with music. Grandpa Todd grew a large garden to help feed his family during the depression. Grandma Todd spent her life caring for children with gentleness. Grandfather Haymore’s greatest joy was teaching the gospel. Grandmother Haymore made clothes for me and for many, many, many others.

4. I can do what Moroni did. I can gather courage by remembering my heavenly parentage. I am “a beloved spirit… daughter of heavenly parents, and, as such, [have] a divine nature and destiny” (The Family: A Proclamation to the World).

5. I can do what Moroni did. I can get to work and define my future self by figuratively finishing my father’s record, finding ore, and fulfilling my callings.

6. I can do what Moroni did. I can gain comfort and strength though the words of others—listening for promptings from the Holy Ghost, listening to prophets, past and present, and listening to advice from others who have been where I am.

8. I can do what Moroni did. I can submit my will to God’s will and acknowledge that He sees the whole elephant while I see only a speck of an eyelash.

10. I can do what Moroni did. I can look forward to a glorious day in the future when I will actually meet him in paradise at “the pleasing bar of the great Jehovah” (Moroni 10:34).

Loved this article. Loved how inspired and insightful your ideas are. I especially resonated with your insight to change to the positive. I have been feeling strongly this past week that we have had so many negative examples of racialism and I want to see as many examples of loving kindness between races. It seems time to see, hear, and experience positive examples so we can learn from each other ways to change for the better.

This is what Nephi meant by "feasting on the words of Christ". Well done Sister Linford. Thank you for showing me the depths of what may be found in "the Word" when seriously and prayerfully considered including its application to my own life.