A Proclamation and an Apostolic Blessing | Meridian Magazine 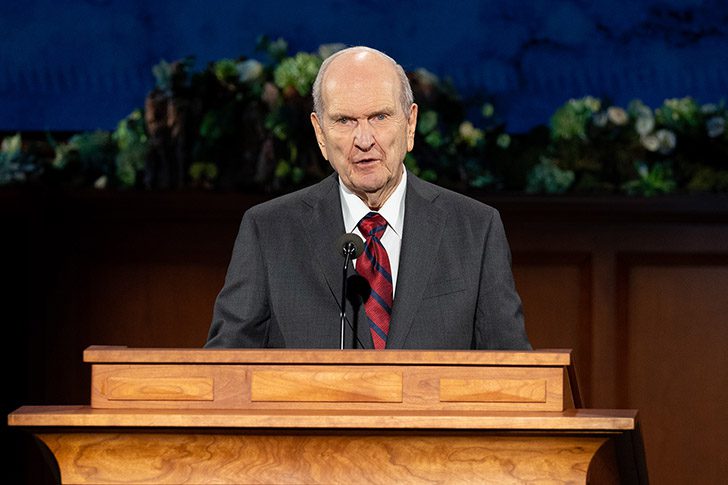 General Conference this past weekend consisted of a series of stunners, not the least of which were the Bicentennial Proclamation to the World and an apostolic blessing directly from President Russell M. Nelson.

The first proclamation was issued in Nauvoo in 1841 and was a call for gathering all the Latter-day Saints to that place.  The second proclamation to presidents, governors and the kings of the earth and was delivered not only to the Saints but was taken by the missionaries to the leaders of the nations of Europe. The third proclamation was a doctrinal statement about the Holy Ghost and the Godhead in response to some unauthorized publications by Elder Orson Pratt.  The fourth proclamation was given during the sesquicentennial celebration of the Church at Fayette, New York, documenting the progress of the Church in 150 years and read by President Spencer W. Kimball.  The fifth was the Proclamation on the Family, read by President Gordon B. Hinckley at the women’s meeting, September 23, 1995.

This last proclamation was issued at the commemoration of the bicentennial of the First Vision of Joseph Smith.  It was read by President Russell M. Nelson as a part of the 190th Annual General Conference of the Church, pre-recorded from the Sacred Grove.

The proclamation is given here in full and in bold type with summary headnotes before each section in italics (not from the Church, but by the author of this article) so that you can see the doctrinal organization of this significant proclamation.  The video of President Nelson in the Sacred Grove is also included here:

The Restoration of the Fulness of the Gospel of Jesus Christ

A Bicentennial Proclamation to the World

We solemnly proclaim that God loves His children in every nation of the world. God the Father has given us the divine birth, the incomparable life, and the infinite atoning sacrifice of His Beloved Son, Jesus Christ. By the power of the Father, Jesus rose again and gained the victory over death. He is our Savior, our Exemplar, and our Redeemer.

Joseph Smith was visited by God the Father and His Son, Jesus Christ

Two hundred years ago, on a beautiful spring morning in 1820, young Joseph Smith, seeking to know which church to join, went into the woods to pray near his home in upstate New York, USA. He had questions regarding the salvation of his soul and trusted that God would direct him.

In humility, we declare that in answer to his prayer, God the Father and His Son, Jesus Christ, appeared to Joseph and inaugurated the “restitution of all things” (Acts 3:21) as foretold in the Bible. In this vision, he learned that following the death of the original Apostles, Christ’s New Testament Church was lost from the earth. Joseph would be instrumental in its return.

We affirm that under the direction of the Father and the Son, heavenly messengers came to instruct Joseph and re-establish the Church of Jesus Christ. The resurrected John the Baptist restored the authority to baptize by immersion for the remission of sins. Three of the original twelve Apostles—Peter, James, and John﻿—restored the apostleship and keys of priesthood authority. Others came as well, including Elijah, who restored the authority to join families together forever in eternal relationships that transcend death.

Joseph Smith was given the gift and power to translate the Book of Mormon, which accounts Christ’s ministry to the Western Hemisphere and teaches life’s purpose and the doctrine of Christ, and affirms eternal relationship of humans to a Heavenly Father and a divine plan

We further witness that Joseph Smith was given the gift and power of God to translate an ancient record: the Book of Mormon—Another Testament of Jesus Christ. Pages of this sacred text include an account of the personal ministry of Jesus Christ among people in the Western Hemisphere soon after His Resurrection. It teaches of life’s purpose and explains the doctrine of Christ, which is central to that purpose. As a companion scripture to the Bible, the Book of Mormon testifies that all human beings are sons and daughters of a loving Father in Heaven, that He has a divine plan for our lives, and that His Son, Jesus Christ, speaks today as well as in days of old.

We declare that The Church of Jesus Christ of Latter-day Saints, organized on April 6, 1830, is Christ’s New Testament Church restored. This Church is anchored in the perfect life of its chief cornerstone, Jesus Christ, and in His infinite Atonement and literal Resurrection. Jesus Christ has once again called Apostles and has given them priesthood authority. He invites all of us to come unto Him and His Church, to receive the Holy Ghost, the ordinances of salvation, and to gain enduring joy.

Millions have embraced a knowledge of these prophesied events

Two hundred years have now elapsed since this Restoration was initiated by God the Father and His Beloved Son, Jesus Christ. Millions throughout the world have embraced a knowledge of these prophesied events.

We gladly declare that the promised Restoration goes forward through continuing revelation. The earth will never again be the same, as God will “gather together in one all things in Christ” (Ephesians 1:10).

The heavens are open, promise of personal witness to the faithful, purpose of the Restoration is to prepare the world for the promised Second Coming of Jesus Christ

With reverence and gratitude, we as His Apostles invite all to know—as we do﻿—that the heavens are open. We affirm that God is making known His will for His beloved sons and daughters. We testify that those who prayerfully study the message of the Restoration and act in faith will be blessed to gain their own witness of its divinity and of its purpose to prepare the world for the promised Second Coming of our Lord and Savior, Jesus Christ.

Surely this bicentennial proclamation will be read, studied and drawn upon for generations to come.

At the end of President Russell M. Nelson’s closing remarks, after he gave the stunning announcement of 8 new temples, he gave the Latter-day Saints (and all who were listening) a special apostolic blessing.  In the midst of an unprecedented time when the world is brought to a halt by a tiny, deadly virus called COVID-19, President Nelson gave the following tender and powerful blessing:

Dear brothers and sisters, I express my love for you. During this time of tension and uncertainty, and invoking the authority vested in me, I would like to confer upon you an apostolic blessing.

I bless you with peace and increasing faith in the Lord.

I bless you with a desire to repent and become a little more like Him each passing day.

I bless you to know that the Prophet Joseph Smith is the prophet of the Restoration of the gospel of Jesus Christ in its fulness.

Should there be illness among you or your loved ones, I leave a blessing of healing, consistent with the will of the Lord.

I so bless you, adding once more my expression of love for each of you, in the sacred name of Jesus Christ, amen.

All of us walked away from conference filled with the love of our leaders and the Spirit of the Lord bearing witness to our souls of their divinely appointed callings.  Truly, this 190th Annual General Conference was not only memorable, it was unforgettable.

It has been wonderful to listen to the words of the Prophets and to participate in the Hosanna Shout. I was also most grateful for the Pronouncement of President Nelson's Apostolic Blessing. My daughter asked me to explain more about an Apostolic Blessing. She asked me; "What is the difference between an Apostolic Blessing and my own prayers for 37 years for better health?" I had a bit of a struggle answering. I would love to have someone with more knowledge help with the answer to that.

It is interesting that this new proclamation is essentially a restatement of the basic facts of the restoration-nothing new really. It makes me think of the proclamation on the family. When it was issued in 1995 many members wondered wondered why it was given because it was something most of society already believed. Now, some years later, many no longer support those basic family values. So...I wonder what the long term purpose of this new proclamation may be. I don't think it is just a nice restatement. I suspect the Lord has in mind something much deeper here. We will know one day.