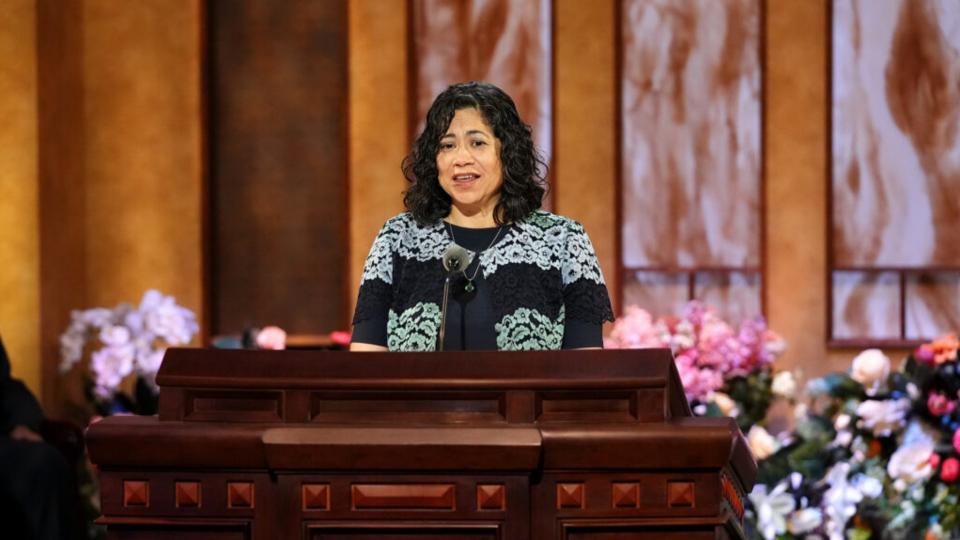 Images via the Church Newsroom.

Along with so many other events and gatherings over the last year, general conference has had to be altered to accommodate the circumstances surrounding the COVID-19 pandemic. Though it is a loss to not have the energy of a full, live congregation, or even the opportunity to be part of that congregation, it also provided a chance to do something a little different.

The Sunday morning session of the April 2021 general conference featured speakers from every inhabited continent on earth. The musical numbers were also offered by a more diverse array of choirs than ever before, featuring performers of all ages singing in a variety of languages. If the musical numbers have to be pre-recorded anyway, there is no limit to where they can come from.

Three of the speakers’ addresses were even prerecorded at pulpits far away from the Conference Center Theater in Salt Lake City, Utah. More than being merely a necessary adaptation to varied and difficult circumstances around the world, this provided a thrilling occasion to approach conference in a new way. The resulting session was filled with a global Spirit of unity and an important reminder that the bonds of death broken on that other Easter morning two millennia ago were truly broken on behalf of everyone.

Yes, the speakers came from very different walks of life, but I was struck by how vulnerable and how similar some of the experiences shared were, as they reflected on and bore testimony of what the knowledge of Christ had given to their lives.

Sister Reyna Isabel Aburto, a native of Nicaragua and second counselor in the Relief Society general presidency, tenderly spoke of the pain of losing her brother. She said,

When I was nine years old, I lost my older brother during a devastating earthquake. Because it happened unexpectedly, it took me a while to grasp the reality of what had occurred. I was heartbroken by sorrow, and I would ask myself, “What happened to my brother? Where is he? Where did he go? Will I ever see him again?”

Back then, I did not yet know about God’s plan of salvation, and I had the desire to know where we come from, what the purpose of life is, and what happens to us after we die. Don’t we all have those yearnings when we lose a loved one or when we go through difficulties in our lives?

A few years after, I started thinking of my brother in a specific way. I would imagine him knocking on our door. I would open the door, he would be standing there, and he would tell me, “I am not dead. I am alive. I could not come to you, but now I will stay with you and never leave again.” That imagining, almost a dream, helped me cope with the pain that I felt over losing him. The thought that he would be with me came to my mind over and over. Sometimes I would even stare at the door, hoping that he would knock and I would see him again.

Similarly, Elder S. Mark Palmer, a New Zealand native and General Authority Seventy currently serving as president of the Africa South Area, spoke of the conversion of his parents. A journey that began for them after the tragic loss of a young daughter:

As a young married couple , they were blessed with three little girls. The youngest of these was named Ann. One day while they were on holiday together at a lake, 17-month-old Ann toddled off. After minutes of desperate searching, she was found lifeless in the water.

This nightmare caused unspeakable sorrow. Dad wrote years later that some of the laughter went out of their lives forever. It also caused a yearning for answers to life’s most important questions: “What will become of our precious Ann? Will we ever see her again? How can our family ever be happy again?

Though they were literally thousands of miles apart, grief brought the same questions into the sorrowing hearts and minds of these family members. Whether watching the door in Nicaragua or standing on a now-devastating shore in New Zealand, the hole left behind in their hearts was the same. And the only thing that could ever fill it was the promise that Jesus Christ brought to all of us when he rose from the grave on the third day.

As Sister Aburto put it, “I testify that through the redeeming Atonement and glorious Resurrection of Jesus Christ, broken hearts can be healed, anguish can become peace, and distress can become hope. He can embrace us in His arms of mercy, comforting, empowering, and healing each of us.”

And Elder Palmer issued this invitation: “I invite all who feel sorrow, all who wrestle with doubt, all who wonder what happens after we die, to place your faith in Christ. I promise that if you desire to believe, then act in faith, and follow the whisperings of the Spirit, you will find joy in this life and in the world to come.

“How I look forward to the day I will meet my sister Ann,” he continued, “I look forward to a joyful reunion with my father, who died over 30 years ago. I testify of the joy to be found in living by faith, believing without seeing, but knowing by the power of the Holy Ghost that Jesus Christ lives.”

The overall effect of these parallel messages, and of the collection of testimonies from around the world that were expressed in the Sunday morning session of conference, was an impression that, across the world, we share common sorrows. But we also have a common source of hope.

And that common source of hope, even Jesus Christ, is both available to billions in their own countries and their own languages, but also deeply and personally present to heal our own individual broken hearts.