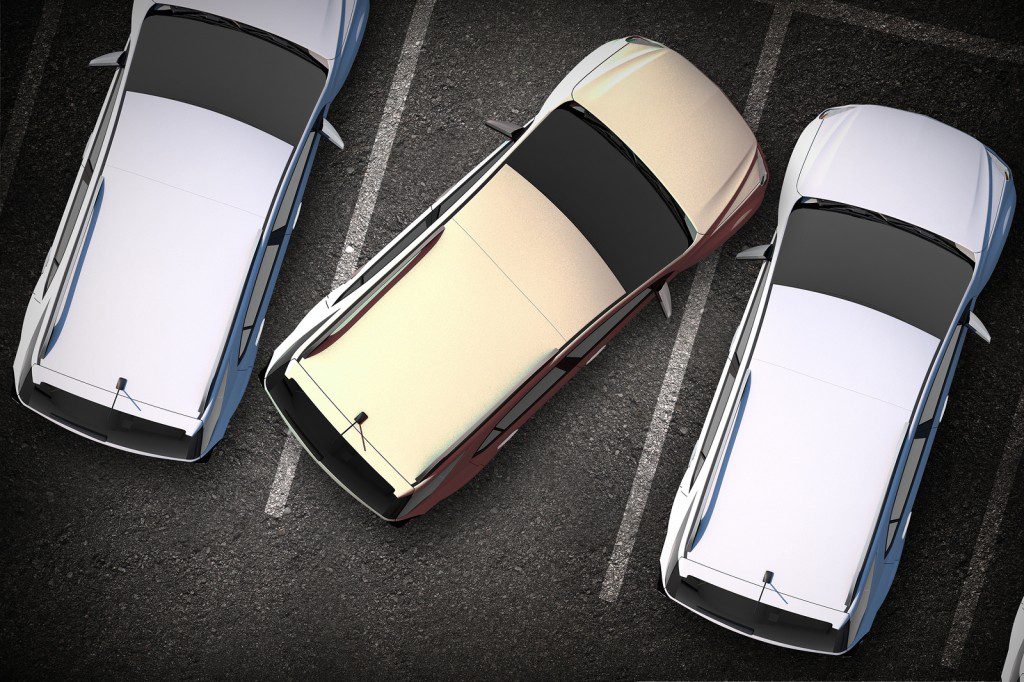 Mr. B. was a drivers’ education teacher and sometimes his attitude about certain things with regard to driving, annoyed him enough that it would slip into his discussions in the classroom. Recently, there had been something that had really annoyed him.

“Do you want to know what makes me mad enough that I about slip into road rage?” he asked his drivers’ education class.

“When someone parks across the middle line between two parking stalls,” Mr. B. answered.

Tim’s twin brother asked, “What do you mean?”

“Let me show you the one that annoys me the most,” Mr. B. replied.

He put a picture up on the screen. It showed a big, beautiful car parallel parked across the center line between two parking spots along a curb.

“This lady,” Mr. B. said, “parks her car in this area every day, and she always parks right across the middle of two of them.”

“Why does she do that?” Tim asked.

“Most people do it to give room on both sides or ends of their car to keep their car from being scratched. But it’s selfish and takes a parking spot away from someone else. This lady parks there almost every morning, and her car is there all day.”

Mr. B. shook his head. “Not in this town. But it ought to be. Quite often I’ve needed to park in that area and there was nothing available, but there her car sat across two spots. I’d give a hundred dollars to anyone who could figure a way to teach her not to do that.”

Mr. B. saw Jim and Tim glance at each other so he added, “A legal way.”

Every day during drivers’ education, Mr. B. fretted about his disgust for different things, but he always came back to the lady that parked across two parking spots. When the students started practicing driving, Mr. B. often had them drive past the car that disgusted him. After they finished drivers’ education, Jim and Tim practiced their hours of driving with their parents, looking forward to the time that they would trade their learner’s permits for real drivers’ licenses. The minute they had their licenses, they went to Mr. B.

“Is that hundred-dollar offer to teach the lady not to park across the two parking spots still available?” Tim asked.

After Jim and Tim explained their plan, Mr. B. laughed and said if they were able to do it, he’d pay.

The two boys went to their dad. It took a little longer to convince him, but he finally agreed to their plan. Early the next morning the two boys drove away in the two smallest compact cars their father had on his lot. They waited until the lady had parked her car across two spots as usual. Then, after she left, one at a time, with the other directing, each of the brothers pulled his car up so its bumper was inches from the lady’s car. The little compact cars barely stayed within the lines of the parking spots, making it so there were three cars in the two spots. The two boys locked the cars and walked back to their dad’s car lot.

After three days, the police called, and Jim and Tim’s dad passed the phone to them. The officer had a chuckle in his voice as he spoke. “Would you mind removing your cars? Though it’s legal for you to leave them there, the lady whose car you have hemmed in would like her car back, and has promised she won’t park that way again.”

So Jim and Tim moved their cars and became one-hundred dollars richer.

Perhaps if you are handicapped and there are no spaces available for you, it might be useful you had a placard made and placed on your windshield explaining your reason for parking in an unusual manner. People can be quite understanding if they know why an action is taken.

I often have to park far to the right of my vertical parking space, like in truth, well into the space to my right. I have to have my door completely wide open in order to enter or leave it. There are often no open handicap spaces. I have seen people stare at my car and it's strange use of two spaces, they seem to understand when they see me arrive with my cane and use the entire space to my left with the open door to gain access. Once when I had parked in a normal size spot with less than ample space, but enough to wiggle out of the seat, I returned to find the car to my left gone and a new one right on the line. Lucky for me, two missionaries had shared lunch with my wife and I. One of them got in and allowed the car to roll forward enough for me to gt the door wide open. The zone leader was also present and agreed, since the engine did not turn on, the elder moving the auto was within the spirit of the law regarding driving vehicles other than mission owned ones,