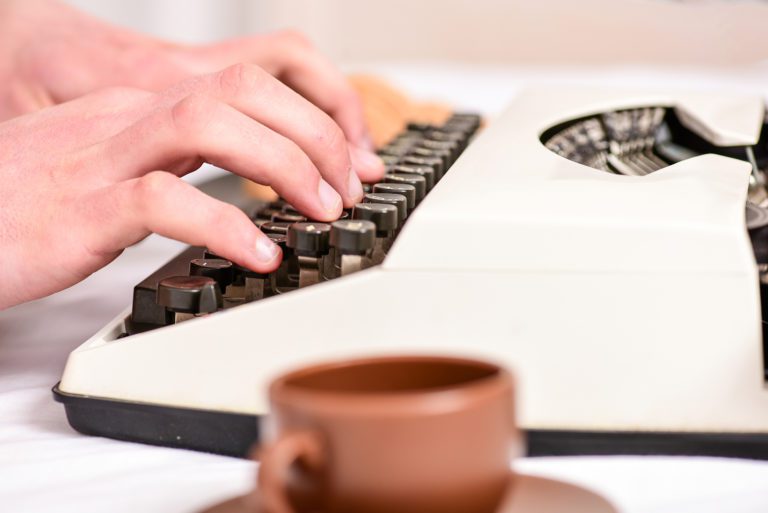 When I started college, I was a computer science major. Back then, computers were much different from what they are today. There were no computer screens as we have today. We worked on punch cards, and the punch card machines looked like big typewriters. We submitted our programs to the system administrators. They would run them through, and our output would come back on printed pages. This all took a lot of time.

Another challenge was that there were only two punch-card machines on campus that were available to students. We spent a lot of time standing in lines. It was in these lines that I did most of my homework in the first few years of my college career.

If a person was slow at typing, the line backed up a lot. Unfortunately, few people took typing in those days unless they were in office management degrees. But being in computer science, I decided that it was a skill I needed to master.

The idea scared me. I had attempted to learn piano at my mother’s insistence, but I never became good at it. I was impatient, and getting my fingers and my brain to work together seemed like a Herculean task. I soon gave up. I thought that typing would be the same way, and I feared that I would fail. But I knew that if I were to become a programmer, I needed to type faster.

I signed up for the class and diligently did the assignments. When the first test came back, I was disappointed in my grade. I could tell by the groans around the room that I was not the only one.

After the teacher had finished passing out the tests, she turned to us. “You all did very poorly on this test. What is your motivation for taking this course?”

I raised my hand, and when the teacher called on me, I mentioned that I was a computer science major and needed to learn to type.

“No,” the teacher said. “Deeper than that. Why are you here at this university, and why are you taking any course on this campus?”

We had an in-depth discussion about the reasons, and when we boiled it all down to its core, we came to the conclusion that the reason we took any class was because of money. The whole purpose of getting an education was to be able to get a better job and thus make a better living.

Then she did something I will never forget. “Every one of you hold your typing book to your chest,” she said. Once we had done that, she said, “Now pat your books and repeat after me. Money! Money! Money!”

We followed her direction, and we all felt a little silly. Most of the class laughed. But each day after that we started the class in the same way. We held our books to our chests, and, patting them, said, “Money! Money! Money!”

The motivation must have worked. I not only typed my papers, but I started typing papers for friends, my soon-to-be wife, and others. By the end of the semester, I obtained a speed of 145 words per minute, with around 98% accuracy. My fellow students also did much better, and the teacher was pleased with the results. But for me, the greatest takeaway from the class was a deep sense of accomplishment.

Now, as my math students struggle with their assignments, I am tempted to have them hold their books to their chests, pat them, and say, “Money! Money! Money!”

Do it! It is weird, and will be memorable.

I wonder if we could apply this approach to scripture study? But instead of saying "Money, money, money", say "Salvation, salvation, salvation"? Or some other such mantra?? VERY applicable. If I ever take another class again, I'll remember this!! LOL.