A Literary Glimpse From the 1800s to the Present | Meridian Magazine 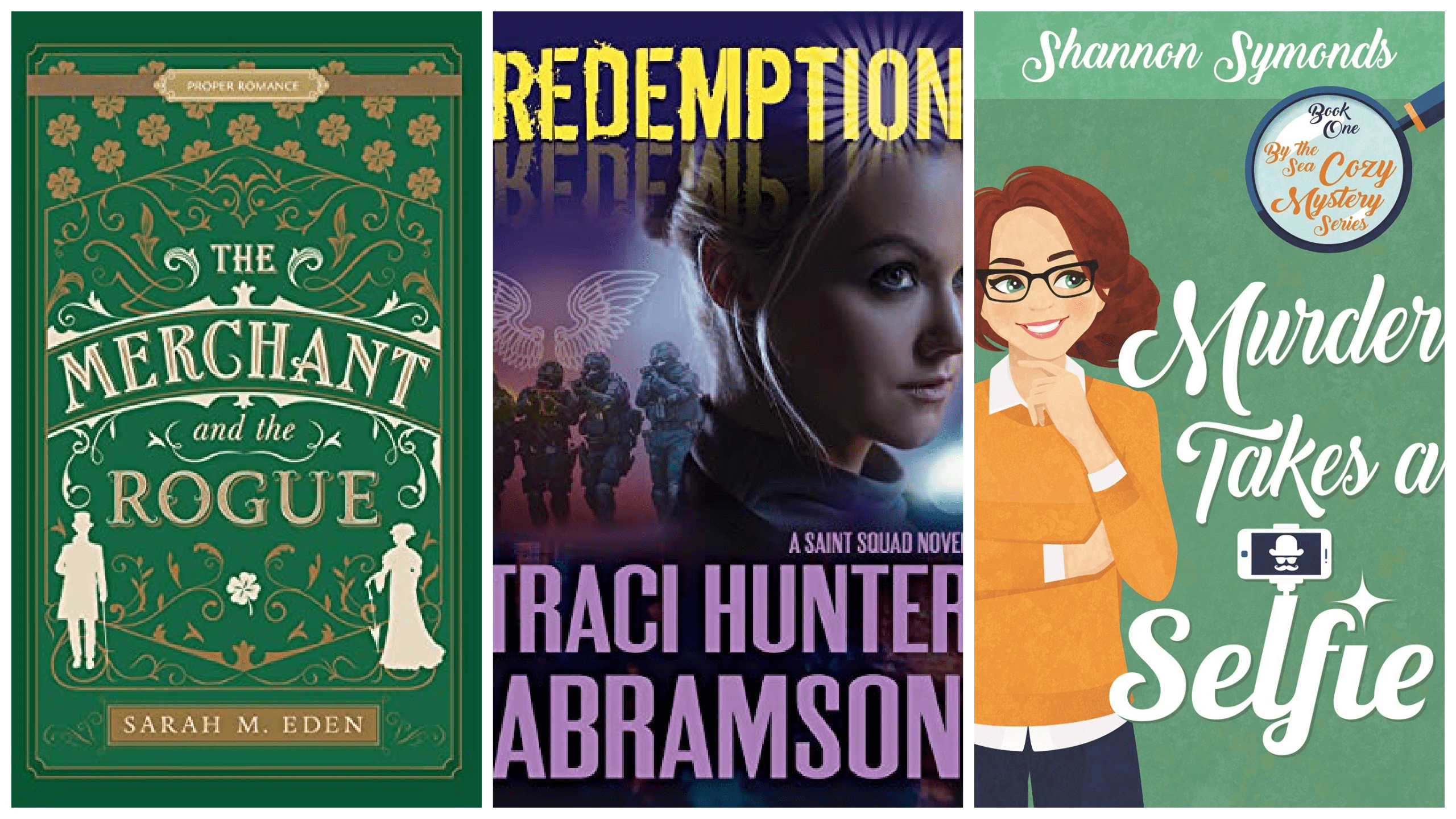 A Literary Glimpse From the 1800s to the Present

Two authors, favorites of many, present new stories set more than a century apart and geographically on two different continents. Sarah M. Eden takes us to the slums of 1865 London with The Merchant and the Rogue, while Traci Hunter Abramson presents a modern-day Saints Squad novel, Redemption set in the USA. I added to these compelling stories a review of a cozy mystery featuring a teenage cast, Murder Takes a Selfie by Shannon Symonds. Though the first two books are generally marketed for an adult audience and the third for young adults, I suspect teens and adults will both love all three books.

THE MERCHANT AND THE ROGUE by Sarah M. Eden

Two immigrants come together in Sarah M. Eden’s newest Proper Romance; Vera Sorokina from Russia and Brogan Donnelly from Ireland. Vera loves to read the Penny Dreadful novels of the Victorian era. She works in her father’s print shop where she sells the novels and finds time, not only to read, but to assist and mentor the many poor orphans who roam the streets of London. She and her father are refugees with some serious concerns about what or who may have followed them from Russia.

Brogan, though born and raised in Ireland, found himself in a position where he had to flee his native land. With his sister he escaped to London where he began writing Penny Dreadfuls and became associated with the secret Penny Dreadful Society, a group of writers who attempt to improve and protect the lives of the poor. He’s given a secret assignment which places him in a position that involves working with Vera. Both have secrets and Brogan can’t let her know he is there to investigate her father. Their safety and the safety of others they care about depends on their ability to trust each other with the secrets from their past.

Sarah Eden’s characters are believable and likable, too. Readers will enjoy attempting to unravel the mystery plaguing Vera and Brogan. The setting gives a realistic picture of the poorest sections of London and the pitiful prospects of the many orphan children, left to care for themselves during the Victorian period. Inserted throughout the story are chapters from the Penny Dreadful books that some readers will love and others may find an annoying interruption to the main story.

Sarah Eden is a highly acclaimed author and the recipient of numerous writing awards. She combines her love for history with Romance, depicting well the Regency, Victorian, and settlement of the American West eras in her many stories. Her awards include being a USA Today Best-selling author, 2019’s Foreword Reviews INDIE Awards Gold Winner for Romance, and a 2020 Holt Medallion finalist. She is a two-time “Best of State” Gold Medal winner for fiction and a three-time Whitney Award winner. She, her husband, and children make their home in Utah.

The Merchant and the Rogue by Sarah M. Eden, Published by Shadow Mountain, 368 pages, softcover $14.49, Also available on Audio.

Traci Hunter Abramson is a favorite author of a large segment of readers. Count me among those who thoroughly enjoy her books. Her newest novel to be released in September is one I particularly enjoyed. It is a new addition to her Saint Squad series and features a young man, Gage Stewart, who made a serious mistake at the tender age of fifteen when he held a class of high school students at gunpoint and was wounded by a member of the Saint Squad. He has turned his life around since then, but that mistake, and the scars left by his abusive father, continue to haunt him and his relationships with others. After six months in a mental prison unit, he has concentrated on finishing high school, and gaining a college degree in criminal psychology. His first job is with a training unit that teaches individuals and police officers how to deal with a mass shooting incident. The Saint Squad is involved with the unit through some of their wives and as volunteers. They don’t approve of finding Gage there.

Skyler Prescott lives and works at one of the prestigious hotels owned by her wealthy father. Given everything money can buy all of her life, but little to no freedom, and no closeness to her parents or siblings, she longs for a normal life. She befriends the woman in charge of the training seminars being taught at the hotel and becomes friends with Gage. As their relationship progresses beyond friendship they take care to keep his past and her relationship to her wealthy father secret from each other until a foreign assassin team sets up a hit at a nearby comedy club with plans to frame Gage as the shooter and lure a particular presidential candidate to the hotel where they can assassinate him.

The action is fast paced in this story and will keep the reader glued to its pages. Both major and secondary characters are realistic with believable actions and reactions. Both Gage and Skyler are victims of abuse, though the abuse is different. Gage’s father was a popular high school teacher, but at home he beat and ridiculed his son. Money and prestige are everything to Skyler’s father. He has no time to listen to his children or consider their wants and choices; he gives orders, they obey; period. The Saint Squad members are mixed personalities as are their wives. There are a few references to past events in the series, but they clarify rather than confuse the story, and anyone who has not read the previous volumes will enjoy this one as a standalone. The setting and background feel authentic and do not distract from the story. And with all of Abramson’s books the ending is strong, dramatic, and satisfying.

Traci Hunter Abramson was born in Arizona, lived in Venezuela for a study abroad program, graduated from Brigham Young University, and then went to work for the Central Intelligence Agency. She now is coach for a local high school swim team. She has more than thirty published novels to her credit and has earned numerous writing awards including seven Whitney awards including two Best Novel of the Year awards. She and her husband are the parents of five children. They live not far from Washington D.C.

In this contemporary novel written primarily for young adults, but will appeal to older adults struggling with life’s complexities as well, Esther and Sophie are best friends. They’re high school students in a quiet Oregon coastal town. Esther’s parents are divorced and her father is in prison for attempting to kill her mother. He recently escaped and created a great deal of chaos before being recaptured. The whole incident left Esther shy of public attention. She and her mother share a home with her new husband, who is a local police officer, her grandmother, her mother’s younger brother, and her grandmother’s foster daughter. Both girls love to read so when a famous author does a signing at the local bookstore they attend, as do the foster daughter and the young uncle. Parker and Paisley, twins who recently moved from Great Britain, are there as well. Esther has a crush on Parker, but she considers Paisley a snob. After the signing Parker invites Esther and Sophie to hide in a tree house near his family’s mansion-like home to watch the famous people invited there for a post-signing party. Following the party, they witness a major argument between Parker’s parents and see Paisley with the family dog leave for a moonlight run on the nearby beach. The next morning, they learn that Paisley and the dog never returned. Soon the whole family is involved in the search for the missing girl amid rumors she ran away, was murdered, or may have been swept out to sea by a high tide.

The characters in this story are portrayed well. We can sympathize with Esther dealing with her awkward relationship with her stepfather, her hurt and embarrassment concerning her real father, and her reluctance to be the one to take charge. We can also like and sometimes identify with Sophie who charges right in and gets things done. The characters are all portrayed as distinctive individuals, some with severe obstacles in their lives. Their dialogue is handled well and the author does an excellent job of showing how different people, both adults and teens, deal with hurt, insecurity, love, friendships, and the uncertainties of life.

Shannon Symonds, mother of six, lives in a small beach town in Oregon. Murder Takes a Selfie is her third published novel.