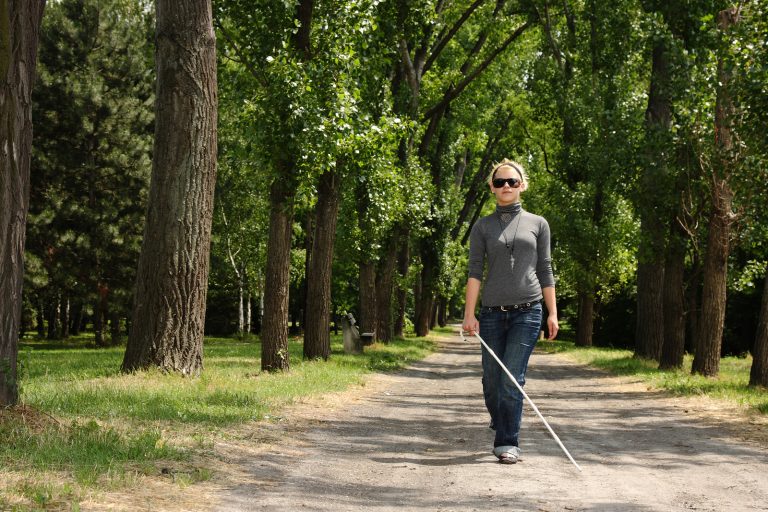 Some notes taken from Pim van Lommel, Consciousness Beyond Life: The Science of the Near-Death Experience (New York: HarperCollins, 2010), 23-25:

Vicki was born very prematurely in 1951, with eyeballs and optic nerves damaged by an extremely high concentration of oxygen in a primitive incubator and, as a result very soon thereafter, an atrophied visual cortex in her occipital lobe.

In 1973, Vicki was left in a coma by a serious auto accident that gave her a basal skull fracture and a severe concussion, as well as fractured neck and back vertebrae and a broken leg.

The next thing I recall I was in Harbourview Medical Center and looking down at everything that was happening.  And it was frightening because I’m not accustomed to see things visually, because I never had before!  And initially it was pretty scary!  And then I finally recognized my wedding ring and my hair.  And I thought: is this my body down there?  And am I dead or what?  They kept saying, “We can’t bring her back, we can’t bring her back!”  And they were trying to frantically work on this thing that I discovered was my body and I felt very detached from it and sort of “so what?”  And I was thinking, what are these people getting so upset about?  Then I thought, I’m out of here, I can’t get these people to listen to me.  As soon as I thought that I went up through the ceiling as if it were nothing.  And it was wonderful to be out there and be free, not worry about bumping into anything, and I knew where I was going.  And I heard this sound of wind chimes that was the most incredible sound that I can describe — it was from the very lowest to the very highest tones.  As I was approaching this area, there were trees and there were birds and quite a few people, but they were all, like, made out of light, and I could see them, and it was incredible, really beautiful, and I was overwhelmed by that experience because I couldn’t really imagine what light was like.  It’s still . . .  a very emotional thing when I talk about this . . . because there was a point at which . . . at which I could bring forth any knowledge I wanted to have.  (24-25)

Dr. van Lommel cites a summary from K. Ring and S. Cooper (Mindsight, 1999), about a portion of Vicki’s experience in which she meets — and sees — some prior acquaintances:

There are five of them.  Debby and Diane were Vicki’s blind schoolmates, who had died years before, at ages eleven and six, respectively.  In life, they had both been profoundly retarded as well as blind, but here they appeared bright and beautiful, healthy and vitally alive.  They were no longer children, but, as Vicki phrased it, “in their prime.”  In addition, Vicki reports seeing two of her childhood caretakers, a couple named Mr. and Mrs. Zilk, both of whom had also previously died.  Finally, there was Vicki’s grandmother — who had essentially raised Vicki and who had died just two years before this incident.  Her grandmother, however, who was further back than the others, was reaching out to hug Vicki.  (25)

In the end, Vicki is obliged to reenter her body:

And then I was sent back and then I went back into my body and it was excruciatingly painful and very heavy and I remember feeling very sick.  (25)

Dr. van Lommel, a Dutch physician and researcher with a specialty in cardiology, comments on Vicki’s case:

The fact that somebody who has been blind from birth as a result of an atrophied eyeball and optic nerve and who has an undeveloped visual cerebral cortex can nonetheless see people and surroundings raises significant questions.  How is it possible that this woman can see, from a position outside and above the body, at a moment when she is in a coma caused by brain damage sustained in a serious traffic accident?  She has never been able to see.  Besides, she perceives things from a position outside her body.  How does she do this?  What is responsible for this?  How can she be aware of her perceptions during her coma?  This is impossible according to current medical knowledge.  The stories of Vicki and of other blind people with an NDE are forcing scientists to consider new ideas about the relationship between consciousness and the brain.  Vicki’s reported observations could not have been the product of sensory perception or of a functioning (visual) cerebral cortex, nor could they have been a figment of the imagination given their verifiable aspects.  (26)

Incredible story! Thanks for sharing. It helps verify the fact that there truly IS so much more than meets the eye...literally a different dimension to look forward to! May we always remember how thin the veil really is, and that we are so much more that what houses our spiritual body and soul...

I have read many near death experiences,and this is beautiful. In the book I have of these stories, I know one of the people, who did not share his name, but he had a very sacred experience in the hospital.He only alludes to it in the book.