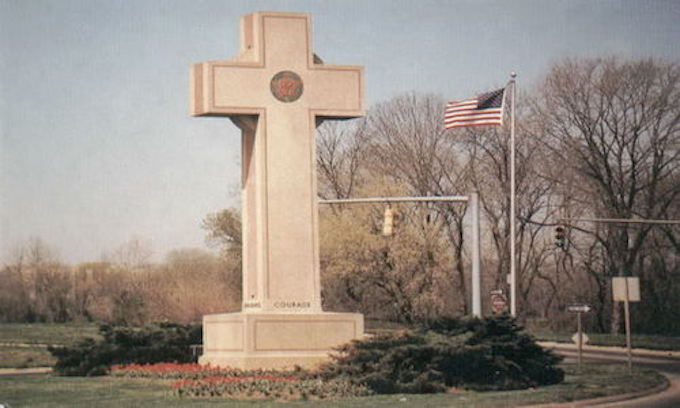 A Big Win for Religious Liberty and Why It Matters

In a 7-2 decision, the Supreme Court ruled yesterday that a 40-foot-tall cross, standing in Bladensburg, Maryland can remain standing and does not unlawfully privilege Christianity.

All eyes have been on this case, as it impacts other religiously-based monuments across the country.

Those dissenting were Justice Ruth Bader Ginsburg and Justice Sonia Sotomayer, though a number of the Justices wrote their own opinions on a case that has such potential ramifications.

The cross had been challenged by the American Humanist Association who had won in the 4th Circuit Court. The three-judge panel who heard the case agreed that the cross represented an impermissible endorsement of religion because a reasonable observer would equate the symbol as being inherently Christian.

Following World War I, the residents of Prince George County wanted a place where they could mourn and honor their dead. Nearly fifty men from the community had fallen during the conflict. Many of them were buried in France, thousands of miles away from those who remembered them. After multiple rounds of fund-raising, a 40-foot “Peace Cross” was erected in tribute. At its base sits a plaque inscribed with the names of each of the men who did not make it home. The seal of the American Legion is also found on the cross along with four words: “Valor,” “Endurance,” “Courage,” and “Devotion.”

The Peace Cross stood in Bladensburg, Maryland for 90 years without objection, often acting as a staging ground for Veterans Day and Memorial Day celebrations. In 2014, however, the American Humanist Association brought suit claiming that the cross violated the Establishment Clause due to its location on public property and the expenditure of city funds for its upkeep.

When the cross was first built, it was on private land, but many years ago Maryland was expanding a nearby highway and exercised the power of eminent domain, acquiring the parcel of land where the memorial was located. Still, the memorial went another half century without anyone having objections against it.

“For nearly a century, the Bladensburg Cross has expressed the community’s grief at the loss of the young men who perished, its thanks for their sacrifice, and its dedication to the ideals for which they fought,” Justice Samuel Alito wrote in the majority opinion for the court.

“It has become a prominent community landmark, and its removal or radical alteration at this date would be seen by many not as a neutral act but as the manifestation of ‘a hostility toward religion that has no place in our Establishment Clause traditions,’” Alito wrote.

This is the essence of the holding: That the cross originated as a Christian symbol and retains that meaning in many contexts does not change the fact that the symbol took on an added secular meaning when used in World War I memorials.

Not only did the Bladensburg Cross begin with this meaning, but with the passage of time, it has acquired historical importance. It reminds the people of Bladensburg and surrounding areas of the deeds of their predecessors and of the sacrifices they made in a war fought in the name of democracy. As long as it is retained in its original place and form, it speaks as well of the community that erected the monument nearly a century ago and has maintained it ever since. The memorial represents what the relatives, friends, and neighbors of the fallen soldiers felt at the time and how they chose to express their sentiments. And the monument has acquired additional layers of historical meaning in subsequent years. The Cross now stands among memorials to veterans of later wars. It has become part of the community.

The Religion Clauses of the Constitution aim to foster a society in which people of all beliefs can live together harmoniously, and the presence of the Bladensburg Cross on the land where it has stood for so many years is fully consistent with that aim

Even if the original purpose of a monument was infused with religion, the passage of time may obscure that sentiment. As our society becomes more and more religiously diverse, a community may preserve such monuments, symbols, and practices for the sake of their historical significance or their place in a common cultural heritage.

With sufficient time, religiously expressive monuments, symbols, and practices can become embedded features of a community’s landscape and identity. The community may come to value them without necessarily embracing their religious roots.

The Family Research Council noted: In a concurring opinion, Justice Neil Gorsuch talked about how tired he is of this “I-take-offense” threshold for suing. “In a large and diverse country, offense can be easily found. Really, most every governmental action probably offends somebody. No doubt, too, that offense can be sincere, sometimes well taken, even wise. But recourse for disagreement and offense does not lie in federal litigation. Instead, in a society that holds among its most cherished ambitions mutual respect, tolerance, self-rule, and democratic responsibility, an ‘offended viewer’ may ‘avert his eyes’…or pursue a political solution.” In other words, Gorsuch insisted, if secularists are this upset about the memorial, take it up with the legislature! After all, Justice Kavanaugh added, “This court is not the only guardian of individual rights in America.”

The high court ruling marked a win for all Americans, said Emilie Kao, director of the DeVos Center for Religion and Civil Society at The Heritage Foundation.

“The founders envisioned a public square where Americans of all faiths, and even those with no faith, would be free to express their beliefs,” Kao said in a written statement.

“Throughout our history, Americans have used religious symbols to commemorate meaningful events—from legislative prayer to observing holidays and expressing the principles of justice,” she said.

But, Kao added, the Supreme Court could have done more.

“While the court decided this case correctly, it did not clarify its own confusing and contradictory standards for deciding other Establishment Clause cases. Even though four justices criticized the long-discredited 1971 decision in Lemon v. Kurtzman and its ‘shortcomings,’ they did not vote to overturn this distortion of the Constitution,” Kao said.

“The Constitution as written, not the personal views of judges, should guide how the American people express their religious faith in the public square.”

The Family Research Council reported: Protecting war memorials is important, but these issues will continue to bubble up if the Supreme Court doesn’t scrap the “Lemon test” that’s driven the attacks on other faith-based monuments and displays. Justice Thomas was certainly more than ready to.

“Nearly half a century after Lemon,” Thomas writes, “and, the truth is, no one has any idea about the answers to these questions. As the plurality documents, our ‘doctrine [is] in such chaos’ that lower courts have been ‘free to reach almost any result in almost any case.’ Scores of judges have pleaded with us to retire Lemon, scholars of all stripes have criticized the doctrine, and a majority of this Court has long done the same. Today, not a single Member of the Court even tries to defend Lemon against these criticisms — and they don’t because they can’t… It is our job to say what the law is, and because the Lemon test is not good law, we ought to say so.”

Kelly Shakelford, president of First Liberty Institute, said, “Those who have for decades tried to purge the landscape of any religious symbols can now park their bulldozers and sandblasters. Our founders would have been appalled at their attempts to make the government hostile to our religious heritage, history and symbols.

“All Americans now have more freedom than we have had in decades. Government officials will now no longer be able to employ the First Amendment as a hostile cudgel against people of faith and their public expressions of faith.”

In the wake of this decision, the American Humanist Association said, “Our legislative efforts will be redoubled.”