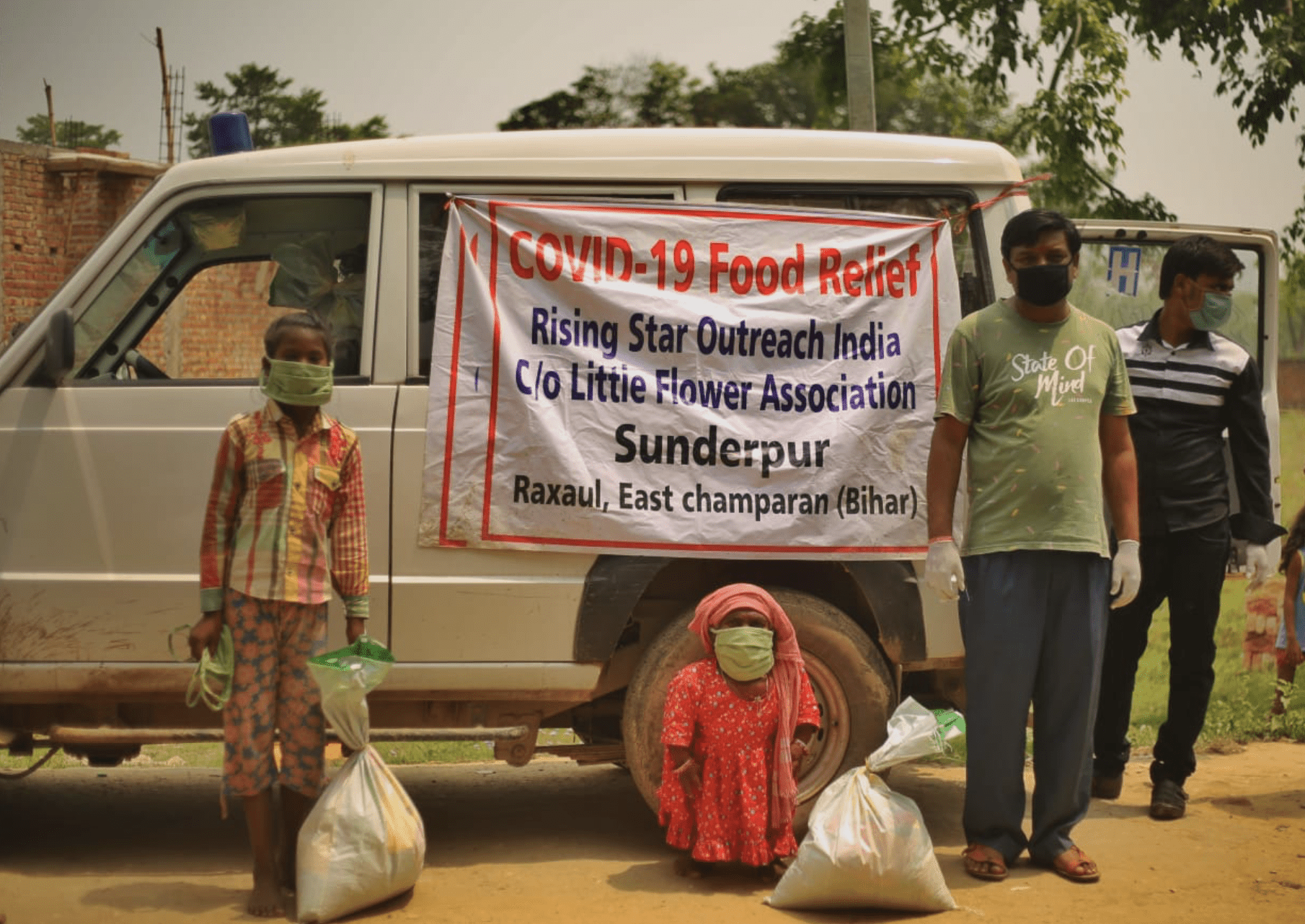 To learn more about the efforts of Rising Star Outreach, including how you can help, CLICK HERE.

Like many schools around the world during this Corona Pandemic, the Schools at Rising Star Outreach were dismissed nearly two months ago.  Since that time, we have been teaching our students on-line, like other schools. The biggest difference is that typically, in most places, people have access to smart phones. That is not necessarily the case in the leprosy colonies of India!

In order to find a way to reach the children in the leprosy colonies our leaders did a survey of each colony to ascertain how many smart phones existed in each colony. While many of the people have cellphones, 99% of them are just that—cell phones—not smart phones. As such, they cannot connect to any on-line training.

Fortunately, we have found at least one smart phone in almost every colony, with some of the most affluent colonies even having two or three.  Working with the colony leaders we got commitments from the smartphone owners that for three hours a day, the phones would be dedicated to our on-line learning courses.

This may seem like a small sacrifice to some people, but to others, who like to stay constantly connected, this was a huge ask. But to my knowledge, we were not turned down by a single smartphone owner.

So, now in the states of Tamilnadu, Bihar and Maharashtra children gather to be instructed by their Rising Star Outreach teachers. This is where this story gets fun—proving that this Corona cloud has a silver lining!

Although, due to space limitations, we are only able to accommodate a small proportion of students from each colony at the Rising Star Outreach schools, once the cellphone is set up in the community hall, there is no limit to how many children can participate. We’ve been thrilled to learn that most of the students in the colonies are “tuning in”, regardless of whether they attend our schools or not.  That is a great blessing!

One of the causes for concern in India during the current lockdown is that while the children in private schools have access to on-line learning, the millions and millions of children from poor villages and the slums, have been left behind.

At Rising Star, we are very aware of how unique our school is, in that it has a large, beautiful, computer lab. Most of the village schools around us have no computer at all. That makes it truly impossible for any on-line learning to occur during the Covid-19 shutdown, thus making the gulf between the well-to-do and the poor even more pronounced. But through our on-line school we are bridging that gap in the leprosy colonies!

If I ended the story here, our on-line school being conducted by Rising Star Outreach would still be a happy ending. But, in this case, we had quite a surprise develop at some of our colonies. We were surprised to learn that many of the children’s parents were quietly slipping in the back and paying careful attention to the teachers on the small cellphone screen at the front of the room.

Many of the parents in the leprosy colonies have lived many of years of their lives by begging. They never had the luxury of attending school, since many of them were taken, even as infants, out on the streets to beg. Their lives have improved over the last 15 years as Rising Star Outreach has enacted a far-reaching micro-finance program so that these people could obtain small loans to start small businesses.  While a few of the colonists still beg, many more now make their living through their own small businesses. They are proud to have become productive citizens of India!

While greatly improved, their lives are still hampered by the fact that they cannot read or write, or even do the simplest of math problems. But there is, it seems, an inherent thirst for knowledge that exists within each of us. Not content to have their children read street signs and billboards to them, these people want to be able to read for themselves. They are attentive students at our online teaching programs!

Trying to reach every child with an opportunity to attend school has been a massive goal for us. To be honest, we never even considered the fact that the parents, also, hungered for knowledge to be able to read and write. But the Corona virus has now provided these people with a unique opportunity to learn—one that they would not have had access to before the lockdown in India. This is a wonderful surprise silver lining to the suffering that has been occasioned by the Corona pandemic.

The mental picture of a small cellphone screen held high in front of a large crowd of sitting students, both from our own schools and from many others, with their older brothers and sisters sitting in to help tutor them, should they have any questions, is a happy scene. But when it is expanded, and we see the many parents excitedly watching, and practicing writing with their sticks in the dirt (since they lack paper), the scene becomes one that should bring a smile to everyone!

A Humbling Story of Giving

At Rising Star Outreach, we have been frantically trying to get food and medical supplies out to people in colonies scattered throughout both the states of Tamilnadu and Bihar in India. It has been very gratifying to see some of our students who heard we were assembling relief packets, come and pitch in to help create these packets for delivery. Some of our staff have also come to help.

Working together we were able to get 1,750 packets out to families spread across the two states. These packets of food were pretty simple; containing mostly rice, beans, oil, salt and spices, and wound-care necessities.  Yet they were received with such joy and thanksgiving that you might have thought we’d just delivered thousands of dollars! They were basically the simple necessities needed to sustain life during the complete shutdown of the Indian society due to the Covid-19 pandemic.

Some of the reactions from those receiving these life-giving packets ranged from, “This is the happiest day of my life, because we had given up hope of being able to stave off starvation,” to “This is the greatest gift I’ve ever received, because it is the gift of life and hope”.  And finally, “We thought we’d been forgotten. Thank you, thank you for not forgetting us!”

Now here’s where the story takes an amazing turn.  The Prime Minister of India, Narendra Modi, asked every organization, village and city to donate to the Prime Minister’s Fund for Covid-19 Relief. The idea was that if everyone in India did their part the country would be able to address the tremendous needs that were being caused by the Pandemic.

One of the leprosy colonies that we delivered food & medical packets to is the Venkatapuram Colony in Tamilnadu. They had been at the verge of starvation when we delivered the packets to them. One might expect that the Prime Minister’s plea would fall on deaf ears in such a place.

But the sense of gratitude that was felt by the colony came through. Together they raised an incredible 6,600 rupees (about $88) for the Prime Minister’s Fund. They had been fed, now they felt empowered and duty-bound to help others!  They were willing to sacrifice to ensure that others would also be fed. Instead of them being the needy ones, they had become empowered to be the ones to help lift others! That one act of service on the part of Rising Star Outreach had lifted them. With the gratitude they felt, they now reached out to help others.  What a beautiful response!!

One of the things that has always impressed me during my service at Rising Star Outreach is the innate goodness of mankind.  Most people care about others.  Most people desire justice, fairness, and simply seek for the opportunity to provide for their families and live with dignity. Once their needs are met, more often than not, they in turn try to lift others.

Studies show that surprisingly the poor donate a much higher percentage of their income to help others in need.  In comparison, the wealthy donate a much lower percentage of their income to those in need. In trying to explain these phenomena some have put forth the idea, that since the poor know hunger and deprivation, they have a greater emotional response when they see others experiencing it and are willing to make greater sacrifices to help out.

This little Venkatapuram Leprosy Colony is a beautiful example of this principle. They have taught me that each of us has the power to lift another, regardless of our circumstances. Every one of us has the power to make this a better world. By working together, we can make sure that all are lifted and that no one is left behind!

Their website with all donation information is at: https://risingstaroutreach.org/. I will also add that link to the article, thanks!

Can you post an official link for donating to Rising Star Outreach?