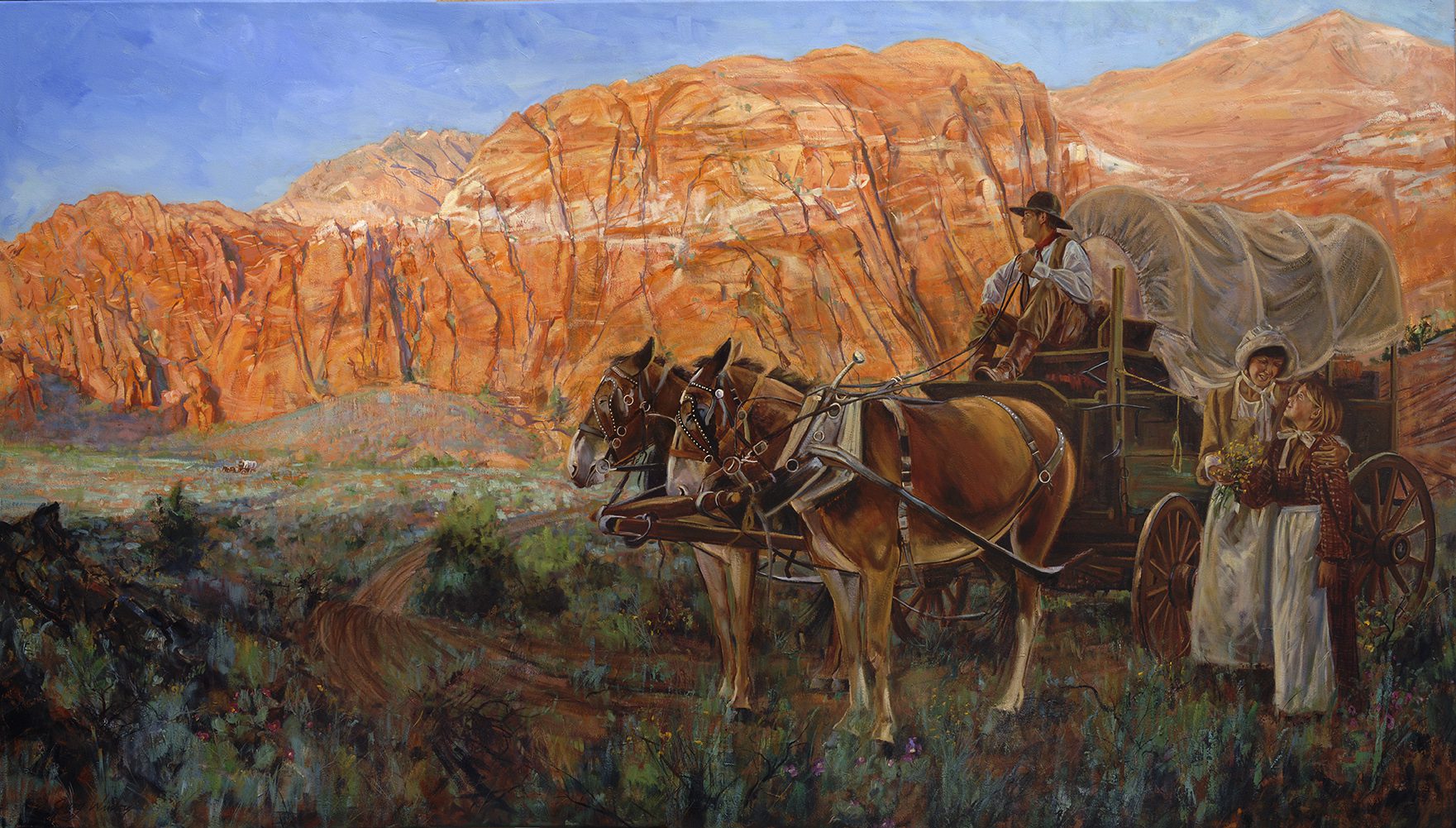 A Beautiful Thing You Probably Didn’t Know About the Pioneers

If you read Meridian regularly you know a new exhibit, Mormon Trails, Pathways to Zion, just opened at The Church History Museum. It’s a fascinating look at the various ways more than 91,000 people emigrated to Salt Lake City.

And in the adjacent room you’ll find dozens of huge, vibrant and glorious paintings by award winning landscape painters John Burton, Josh Clare, and Bryon Mark Taylor, in another exhibit called Saints at Devil’s Gate: Landscapes along the Mormon Trail.

These artists literally went along the Mormon Trail and painted scenes mentioned in pioneer diary entries. The stark landscape, the majestic vistas, the breathtaking skies—it’s all there.

And the art is, without question, spectacular. But the best part of the exhibit, for me, was the indomitable spirit that poured from the tiny postings of the written words that inspired the paintings. Here are just a few examples:

Of all the splendid scenery and awful roads that have ever been since creation, I think this journey has beaten them all…this was hard enough on our poor worn-out animals, but the road after was completely covered with stones, stumps of trees, with here and there mudholes in which our poor oxen sank to their knees…[But] the grandeur of the scenery, to my mind, takes away all fear.” – Jean Rio Griffiths Baker

We have passed beautiful and sublime scenery. Echo Canyon especially—that surpasses anything I have yet seen before. And some spots yesterday I felt I could live and die in!… Beautiful bluffs, beautiful canyons and some things that were anything but beautiful—sorrows and troubles and tears! etc. etc. were mixed up with the beauties of Nature.” – Hannah Tapfield King

A cold dreary winter was before us. I hired a man to build me a sod cave. He took turf from the earth, laid it up, covered it with willow brush and sods. Built a chimney of the same. I hung up a blanket for a door, had three lights of glass to emit light. I built a fire, drew up my rocking chair before it, and that moment felt as rich as some persons (who have never suffered for want of a house) would to be moved into a costly building. Thus we learn to prize enjoyments by sacrifices.” – Louisa Barnes Pratt

I left Nauvoo for the last time perhaps in this life. I looked upon the Temple and city of Nauvoo as I retired from it and felt to ask the Lord to preserve it as a monument of the sacrifice of his Saints…

… I stopped my carriage on the top of a rolling prairie and I had a most splendid view. I could stand and gaze to the east, west, north and south and behold the Saints pouring out and gathering like clouds from the hills and dales, grove and prairie with their teams, wagons, flocks, and herds, by hundreds and thousands, as it were until it looked like the movement, of a great nation.” – Wilford Woodruff

These pioneers were living, breathing miracles. How does one leave all they have, head on foot across a nation to an unknown land, bury loved ones along the way, and still brim with gratitude to God for the sunlight on the clouds, or the warbling of a bird? How did this relentless optimism spring from such misery and suffering?

These were mostly educated, sophisticated people, the kind who packed violins and lace*, who penned their thoughts in the bleakest of circumstances in careful script and poetic style. They kept their perspective and treasured their strong testimonies, allowing God to guide their footsteps. And though they endured all manner of difficulties, they were invincible.

I think of the petty complaints most of us make, people who feel oppressed because they’re not driving their dream car, their repairman is late, or they have to wait on hold. The internet is slow. The store ran out of our favorite ice cream. We’re having a heat wave. As they say, “first-world problems.”

We lived in Cedar Rapids, Iowa for three years, just two hours from Nauvoo. The MormonTrail ran through a friend’s yard. In winter the temperature would plunge to 40 degrees below zero, but if you add in the wind chill factor it drops to 70 below zero. Radio announcers would tell us how long we could be outdoors before flesh would freeze, and piles of dead livestock were commonly shown on the local news. Even with modern-day down jackets designed for arctic explorers and heavily lined boots, you wouldn’t venture far in such weather. Now imagine displaced refugees (yes, our heritage is of displaced refugees) attempting to flee without any such modern winter gear. Crossing Iowa in the winter wearing thin clothes and leather shoes—it’s honestly death-defying. Since that experience I have often said the miracle is that even one person made it.

But then, to read these excerpts, to feel their determination and spirit—it’s simply mind boggling. It makes me want to seek them out one day on the other side, and ask them how they did it.

How on earth can we be even a fraction that courageous, that cheerful, that grateful, in the face of adversity?

There are many great things to be learned from those amazing Saints who had no idea the history they were making: The importance of testimony, unity, obedience, faith, of course. But that singular ability to find the good when all seems lost—this is truly inspiring. This I celebrate on Pioneer Day. This I claim as a part of our LDS culture and our heritage as modern-day pioneers facing our own challenging journeys.

*To see an incredible collection of Pioneer lace from around the world, don’t miss the vast, dazzling exhibit at This is the Place Heritage Park in Salt Lake City.

Thank you, Sister Hilton. Your article was beautifully expressed and touched my heart. Our daughter recently returned from a "trek" experience and talked about how hard it was. I put my arm around her and acknowledged that she had done a hard thing. In my mind, I thought "now image a year and a half instead of two days and - at the end of your journey - you don't come home to an air conditioned house, a hot shower, and a fridge full of food. Rather you have to build a home, plant crops in the middle of the growing season, and make do the best you can while trying to prepare for the coming winter. The pioneers continue to amaze me with their strength, tenacity, and - above all - their faith. Thank you again for the sweet reminder.