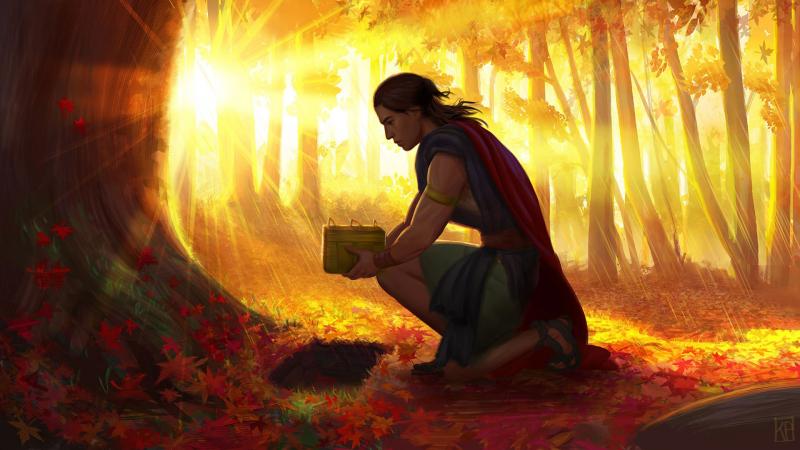 The Come Follow Me curriculum for this year is covering the Book of Mormon. Fortunately, Book of Mormon Central has produced a massive amount of content that can help individuals dive deeper into the Book of Mormon. This content includes over 500 videos which are featured on our YouTube channel and included in our scripture app called ScripturePlus.

This week we are studying the introductory pages to the Book of Mormon. Among all the amazing resources out there, we have seven videos to help you and your family get started.

We teamed up with artist Katie Payne to create a richly illustrated and beautifully animated video of the coming forth of the Book of Mormon. It gives an overview of the plates from which the book was translated, showing how they were handed down from Mormon to his son Moroni and eventually to Joseph Smith. The wording of the video’s narration comes mainly from the Book of Mormon’s Title Page.

This video takes the text of the Introduction of the Book of Mormon and brings it to life with relevant images and video animation. It is perfect for sharing with family members or those who are just beginning to learn about the Book of Mormon.

Another video based on portions of the text from the Testimony of the Prophet Joseph Smith.

We have begun a new video series with BYU instructors Taylor Halverson and Tyler Griffin. In these two videos, they review the Title Page, Introduction, and the testimonies of the Three and Eight Witnesses.

Throughout the last few years, Book of Mormon Central has created several evidence videos on our second YouTube channel, called BMC Studios. The following two videos focus on the plates of the Book of Mormon and their miraculous translation.

The first about the title page could be easily translated into Spanish and would be so useful in many branches and wards.

Thank you for these videos. Especially for the Title Page, Introduction and on the Witnesses of the Book of Mormon. Both men gave wonderful testimony from their personal inspiration and it has strengthened my testimony. I will show this in our BofM Come Follow Me Study Group.