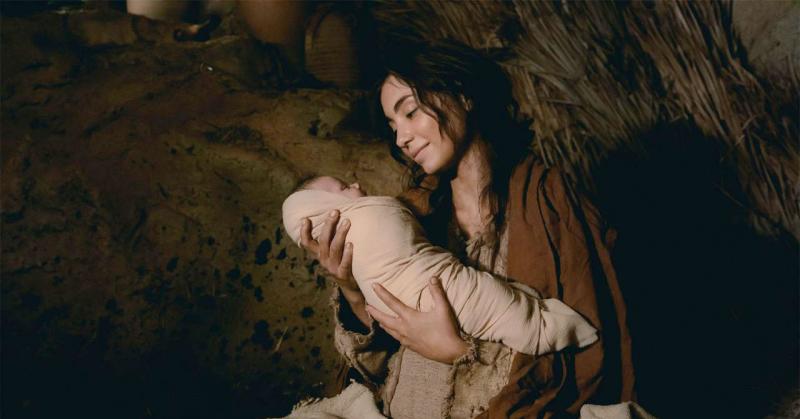 The Church of Jesus Christ of Latter-day Saints recently released its new video for #LightTheWorld entitled “The Christ Child.” This video prepares our hearts and minds for the Christmas season and is a beautiful portrayal of the Nativity. However, what you may not know is that this production depicts the birth of Jesus Christ in stunning historical detail. Jeff Taylor, the co-creative director of the film states:

To help you study the Christmas story this season, Book of Mormon Central has added new content to Matthew 1–2 and Luke 1–2 in our new ScripturePlus app. You can download the app to learn about these historical details and more.

1. How did they travel to Bethlehem?

Instead of Joseph and Mary traveling alone on a donkey, the Church’s new video depicts them traveling in a large caravan of other people and animals. The reality is that traveling to Bethlehem on the Judaean highways would have been a dangerous thing to do alone. Traveling in larger caravans protected travelers from robbers and animals.2

As the wise men approach Bethlehem, you may not have noticed a small architectural feature rising from the Bethlehem skyline: an aqueduct. Herod the Great oversaw sophisticated construction projects to expand the infrastructure of Palestinian cities, including building aqueducts to help citizens more efficiently access their water supply.3

2. Why was there no inn shown in Bethlehem?

As was discussed in the recent Church News article, the same Greek word used for “inn” when detailing Jesus’s birth in the book of Luke (kataluma) is also used in a passage about the location of the Last Supper. In that passage, kataluma refers to an upper room or a guest room that Jesus and His disciples used. It’s likely that instead of searching for an inn or a hotel, Joseph would have sought out a private space in a family member’s home in Bethlehem.4

Placing Jesus’s delivery in the main room of a Bethlehemite home gives him a birth narrative similar to probably thousands of Jewish babies. … In short, Luke portrays Jesus entering the world in a rather unremarkable way. … Such a reading, though it departs from the traditional exegesis of the nativity, actually fits well the recognized emphases of Luke’s infancy narrative. … Luke’s emphasis reflects what must have been most important for him and for his early Christian audience: not the specifics of Jesus’s birth, but what that birth portended for the world.5

To learn more about the kataluma and the circumstances of Jesus’ birth, study Luke 2 in the ScripturePlus app. We hope it enriches your reflection on the Church’s very fine and seasonal production, as you share it with your friends.

3. Why was the stable set inside of a home?

In first-century Jerusalem, animals were usually kept inside the house. The stable where Jesus was born may actually have been an interior courtyard or even a cave adjacent to the living quarters. It’s likely that Jesus was born in the stable of a welcoming family home—contrary to the popular depiction of His birth in a cold and secluded hideaway.6

A typical Israelite home included four rooms: A courtyard for cooking and working, an upper room for living and guests, a lower room for storage and utility, and a stable for animals. In the warm summer months, family members may have used the roof for additional living and sleeping space. When guests stayed with the family, they would have stayed in the upper living room. While an Israelite family’s animals may roam and pasture outside during the day, at night they would gather them in to the side stable room for protection and body heat that would warm the home during the cold season (see image).

4. What song does Mary sing to baby Jesus?

The verse Mary sings in this portrayal is taken from Psalm 27:1. Scholars know from Luke 1:46 that Mary read and understood the Hebrew Bible, and it was common for religious observers to sing verses of scripture. The lullaby’s melody is based on traditional Hebrew musical forms.7

The Lord is my light and my salvation;

Whom shall I fear?

The Lord is the strength of my life

Of whom shall I be afraid?

Psalms are some of the oldest forms of music in the ancient world. Israelites sang Psalms as part of their worship and daily living. The Nephites in the Book of Mormon similarly continued this tradition by incorporating Psalms in their worship services, and composing music of their own.8

5.What are “swaddling clothes”?

While we may not know exactly what Jesus’ swaddling clothes looked like, it’s probable that most parents in the ancient Mediterranean tightly bound their children in long strips of cloth. Both rich and poor alike wrapped their children in these bands of cloth to keep them snug and safe. Luke highlights Mary’s maternal care by explaining that she did what any Palestinian mother would have done for her infant.9 It is possible that swaddling bands were, at least on some occasions, marked in some way or accompanied by other tokens in order to identify whose baby it was.

What can be said of Luke’s inclusion of this detail in his infancy narrative? In the final analysis, they represent maternal care and concern, being wanted and owned, received and embraced, and when accompanied with some sign or token they could presage a portentous future. But most of all, these bands signal the helpless state of the newborn infant, within the bounds and conditions of earthly mortality. … Indeed, that the Lord Jehovah would become flesh as a helpless child and was swaddled like any other infant is an exquisite manifestation of his unfathomable condescension (see John 1:14; Philippians 2:7; 1 Nephi 11:16–20).10

6. How many wise men came to see the Christ child?

Depictions of the Nativity often show three wise men coming to visit the baby Jesus in a stable. However, the Church’s new video portrayed a whole caravan of magoi or “wise men” coming to see the Christ child, while focusing on the experience of one of the wise men in particular. Eric Huntsman, a New Testament professor at Brigham Young University explains:

Matthew uses the term magoi for the special visitors who come to the child Jesus bearing gifts of gold, frankincense, and myrrh. Nowhere, however, does he number them, but because he speaks of wise men in the plural, there must have been two or more. Early artistic representations depict two, three, four, or even as many as twelve wise men visiting the Mother and Child. The number three seems to have become established because of the number of gifts that they brought.11

Some of the details in the Gospel of Matthew indicate that when the wise men came to see Jesus, it may have been a bit later when he was a toddler. Matthew 2:11 describes that the wise men “saw the young child,” and King Herod also ordered that all children “from two years old and under” be slaughtered (Matthew 2:16).

7. Why did the Wise Men give Jesus gold, frankincense, and myrrh?

These three expensive gifts may have had symbolic meaning for announcing the birth of Jesus Christ, our great High Priest. John W. Welch has noted:

The gift of gold would have sparkled like the gold that was required in the Temple. … Frankincense, a resin gathered from trees in south Arabia, provided fragrance in the Temple. … Myrrh is another resin, drawn from the life-sustaining sap of another desert tree … it was used to anoint and consecrate the High Priest, and it could not be used outside the Temple (Exodus 30:26–33) ….

By giving Jesus these three essential, holy, and precious gifts, the Wise Men prepared Jesus, “the last Adam” (1 Cor. 15:45), to offer the ultimate sacrifice as the new and everlasting High Priest, bringing eternal light, life, and God’s presence from heaven above to earth below.12

In addition to the temple symbolism, all three gifts may point to Jesus Christ’s different roles as King, High Priest, and victor over death. “Because crowns were traditionally made of gold, gold was thought to represent Christ’s kingship. Because of its use in religious ceremonies, frankincense was thought to represent Christ’s role as a priest. And because of its use in the embalming of Jesus, myrrh was thought to foreshadow Christ’s death.”13 The Book of Mormon consistently highlights Jesus Christ as King, Priest, and conqueror of death.14 To learn more about the gifts of the wise men and other insights like this, study Luke 2 in the ScripturePlus app.

Finding Meaning in the History

Understanding the historical details of Christ’s birth can give us a better appreciation of His divine role and mission. The Savior of the world was born under fairly ordinary conditions, but his birth was announced in miraculous ways to the shepherds in the fields, the wise men in the east, and the Nephites in America. He condescended below all things and was born as an infant, in order to rise above all and save humanity.

This beautiful video ends with a call to action to Light the World. During this season of light when we celebrating the light of Jesus Christ entering the world, what will you do to spread that light?

“The Church just released ‘The Christ Child’ video. Here are 5 things that set it apart from other versions of the Nativity story,” The Church News, November 23, 2019, online at thechurchnews.com.

1.“The Church just released ‘The Christ Child’ video. Here are 5 things that set it apart from other versions of the Nativity story,” The Church News, November 23, 2019, online at thechurchnews.com.

3.See Ya’akov Billig, “Jerusalem, the Lower Aqueduct,” Hadashot Arkheologiyot: Excavations and Surveys in Israel/חדשות ארכיאולוגיות: חפירות וסקרים בישראל (2014); Kenneth Lonnqvist, “Pontius Pilate—An Aqueduct Builder?—Recent Findings and New Suggestions,” Klio 82, no. 2 (2000): 459–474. Herod the Great’s palace fortress the Herodion can also be seen in the background on the left of the image.

4.This information comes from “The Christ Child” on comeuntochrist.org, accessed November 25, 2019.

6.This information comes from “The Christ Child” on comeuntochrist.org, accessed November 25, 2019.

7.This information comes from “The Christ Child” on comeuntochrist.org, accessed November 25, 2019.

12.John W. Welch, “Why Did the Wise Men Give Gifts of Gold, Frankincense, and Myrrh?,” BYU New Testament Commentary, December 14, 2013, online at byunewtestamentcommentary.com.

I noticed in the video there was hay in the manger. I was curious about that because I have read that at that time of year there wouldn't have been hay. So I'm curious if that is historically accurate or not.

The sound is so soft, I can't hear it and there's no captioning. So I don't get to enjoy it