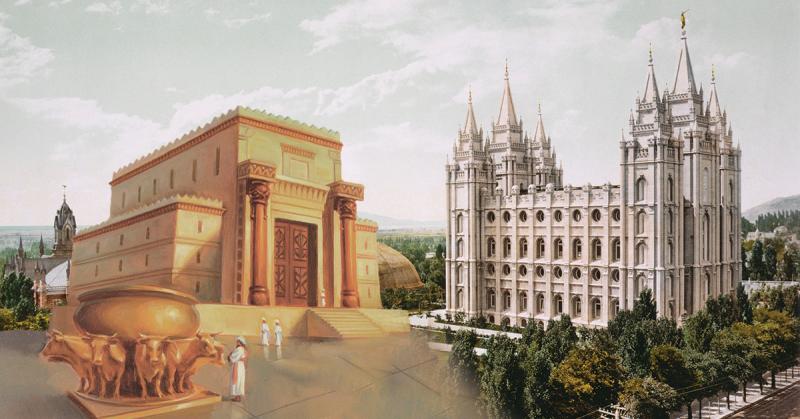 Nephi concludes his record with stirring and profound pleadings to his readers to follow the necessary steps to obtain eternal life. Nephi teaches in 2 Nephi 31–33 about baptism, the gift of the Holy Ghost, prayer, repentance, and enduring to the end. However, some scholars have pointed out that Nephi may be using these principles of the gospel to underscore sacred principles and teachings of the temple. Below are five insights from these chapters that reveal sacred and beautiful principles about ancient and modern, Latter-day Saint temples.

Watch the video below for additional insights on temple themes in Nephi’s conclusion.

In ancient and modern temples, the ultimate goal was for worshippers or priests to progressively ascend into the presence of the Lord. On the Day of Atonement, the Israelite high priest progressed from the east end of the temple to the west, progressively ascending in height until reaching the Holy of Holies to offer the blood of the sacrifice to the Lord. In modern temples, worshippers likewise proceed progressively until reaching the symbolic presence of the Lord in the Celestial Room.

Nephi’s discourse on the Doctrine of Christ reflects this heavenly ascent by describing how to progress step by step to eternal life. The principles of faith, repentance, baptism, receiving the Holy Ghost, enduring to the end, and speaking with the tongue of angels all may symbolize the high priest’s different steps in temple worship that lead to the Holy of Holies. To learn more about how the Doctrine of Christ echoes the patterns of the temple, read KnoWhy 552. Nephi’s conclusion teaches that everyone, not just the high priest can choose to follow Christ and enter into God’s presence.

2. Feasting on the Words of Christ Helps Us Renew Our Temple Covenants

In 2 Nephi 32:3, Nephi exhorts his readers to “feast upon the words of Christ.” While this phrase has often been used to encourage meaningful scripture study, it also can be seen as a symbol for the important sources of spiritual knowledge that one can find in the temple. KnoWhy 306 points out that this feasting may allude to the shewbread of the ancient Israelite temple. Just as ancient high priests would partake of the shewbread, members of the church can “feast” on the words of Christ by partaking of the sacrament each week and renew the covenants they make in the temple.

3. Nephi’s Discussion on Baptism Teaches the Importance of Tokens that Accompany Covenants

In 2 Nephi 31, Nephi teaches on the importance of baptism. In this discussion, he indicates that the reason Jesus Christ was baptized was not necessarily to cleanse him of sin, but rather to serve as a witness that He had entered into a sacred covenant with God (2 Nephi 31:6–7). In the ancient world, covenant making was often accompanied by outward gestures or signs to certify that you would keep the covenant you had just made. When we are baptized, we likewise enter into a covenant with God to keep His commandments, and we outwardly signify this commitment through immersion in the water. In addition to baptism, other ordinances in the temple are also accompanied by signs to show our commitment to the covenants we have made.

4. Prayer Helps Us Fulfill Our Duty of Consecration

Nephi taught that prayer was the next essential step, after baptism, towards our goal of eternal life. By praying, Nephi promises that God “will consecrate thy performance … for the welfare of thy soul” (2 Nephi 32:9). Prayer is a way to seek guidance and to submit to the will of God. Through prayerful submission, we consecrate our talents and efforts to the Lord. “Thus those who consistently seek and then perform the will of the Lord can become sanctified and made holy if they endure in this pattern until the end of their lives.”

5. Nephi Invites All to Enter God’s Presence by Speaking with the “Tongue of Angels”

In Nephi’s conclusion, he brings his readers metaphorically to the “veil” by instructing them on the steps necessary to enter into God’s presence. Through faith, repentance, baptism, and enduring to the end, members of the Church may ultimately enter into God’s presence and “speak with the tongue of angels.” Speaking with the tongue of angels may be a reference to being admitted into God’s divine council, and joining the heavenly hosts that sing and praise God. Having been true to covenants and being entrusted with sacred knowledge, believers can speak with the “tongue of angels” and be admitted into the presence of God.