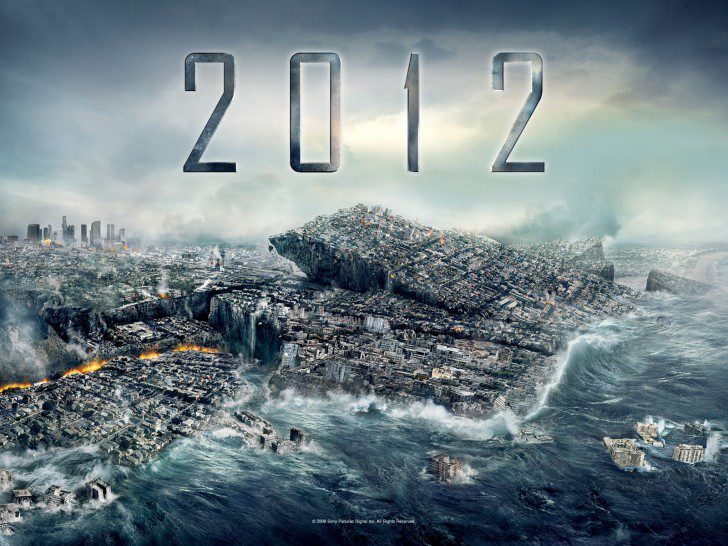 With the perspective of passing time, the December 21, 2012 “end of the world” prediction becomes easier and easier to classify as a false prophecy. A key requirement of this prophecy is the calendar alignment with the winter solstice. However, the correlation with the Mayan calendar that aligns with the solstice is likely wrong, which should have immediately been a red flag that the whole prediction is based on a false premise.[1]

A doomsday “end of the world” prophecy would certainly include events other than just calendar alignments.

At the crucifixion of the Lord Jesus Christ, great catastrophic signs in the Americas, in the Holy Land and throughout the world fulfilled prophesies of Zenos and other prophets.

“The rocks of the earth must rend; and because of the groanings of the earth, many of the kings of the isles of the sea shall be wrought upon by the Spirit of God, to exclaim: The God of nature suffers.” (1 Nephi 19:12)

The fulfillment of Last days’ prophesies of tremendous calamities recorded in the book of Revelation would doubtless be part of true “end of the world” events. One such event is recorded as follows: “And the second angel sounded, and as it were a great mountain burning with fire was cast into the sea: and the third part of the sea became blood;” (Revelation 8:8)

None of these things happened as the December 21, 2012 date came and went. Therefore, it certainly was not an “end of the world” true prophesy. To examine the predicted events extrapolated by the entertainment media look no further than the movie “2012” complete with a new global flood corresponding to the 2012 doomsday date.[3]

The Mayan calendar alignment doomsday movie “2012” has modern day arks used to save humanity from another global flood.

Three scholars, Joseph Goodman, Juan Martinez and J. Eric Thompson are responsible for the major theories to correlate the Mayan calendar to its equivalent Modern calendar dates. The most popular correlation is known as the GMT correlation standing for “Goodman-Martinez-Thompson.”

“Joseph Goodman, a young American journalist who was Mark Twain’s first editor. His work was supported by a Yucatecan scholar named Juan Martinez, who introduced Goodman to the Books of Chilam Balam and the Chronicle of Oxkutzkab, colonial documents written by the Maya themselves…”

“Thirty years later, in 1927, eminent Maya scholar J. Eric Thompson revived Goodman’s work and collaborated with John Teeple to test it against astronomical data in hieroglyphic texts from the Maya Classic Period. … Putting it all together in a 1937 land mark publication, Thompson proposed the GMT (Goodman Martinez Thompson) Correlation ….”[5]

The modern Maya of Guatemala who still use the calendar use the GMT version. Another version, two days later than the GMT, is becoming popular “because certain carved monuments with astronomical data” seem to fit a GMT+2 correlation better. Other native peoples use a variety of alignments. There are many opinions on possible Mayan calendar correlations varying a few days above and below the GMT version alignment day.

The 20 glyphs shown on the Mayan (Aztec) Calendar that mesh with the 13-day count of the trecena to create the 260-day Sacred Round.

The Pratt correlation would place the long count rollover date on December 20, 2012 instead of the GMT version one day later, aligned with the solstice. With that one day change, the solstice is missed and key interpretations at the heart of the logic for the December 21, 2012 doomsday date would be rendered false.

Back to the Drawing Board

When a scientific prediction or prophecy does not come to pass, the theory or interpretation of prophecy needs to be declared falsified and the researcher or scholar needs to go back to the drawing board.

With the complete lack of huge doomsday signs being fulfilled and the likelihood that key theoretical foundations of the December 21, 2012 date itself are in error, the most logical conclusion, years before the 2012 date, should certainly have been that this end of world prophecy is false.

“A recent history channel documentary (title: Decoding the Past: ‘Doomsday 2012: The End of Days’) draws on a myriad of sources said to predict doomsday on December 21, 2012 at 11:20 a.m. UTC time.   Using archeological, astronomical and prophetic sources, I believe this date based on the Mayan calendar is NOT the ‘end of days.’”

“Calendar and celestial alignments often accompany “above and beyond” miracles that are considered to be major signs and wonders that fulfill prophesy. Examples include the three hours of darkness over all the earth and the lunar eclipse at the Lord’s Crucifixion plus the night without darkness at His birth. Both His birth and death were aligned with the Passover holy day on the Hebrew calendar as well as holy days on many other sacred calendars.”

“From Roland Emmerich, director of THE DAY AFTER TOMORROW and INDEPENDENCE DAY, comes the ultimate action-adventure film, exploding with groundbreaking special effects. As the world faces a catastrophe of apocalyptic proportions, cities collapse and continents crumble. 2012 brings an end to the world and tells of the heroic struggle of the survivors. Starring John Cusack, Chiwetel Ejiofor, Amanda Peet, Woody Harrelson and Danny Glover.”

“Over the history of ancient Maya studies, a wide variety of Christian calendar correlation dates have been suggested. Today, the majority of scholars fall into one of two camps – the GMT and the GMT+2. GMT stands for Goodman-Martinez-Thompson, the three early scholars who compiled the evidence correlating the Julian calendar (in use during the initial European contact) with the Maya calendar. The GMT+2 has gained popularity because certain carved monuments with astronomical data, such as the solar eclipse recorded on a stela from Poco Uinic in Chiapas, correlate better with two days after the original GMT. Of the two options, the modern Maya of Guatemala who still keep the calendar follow the GMT. Out of respect for living tradition, the dates presented here also follow the original GMT.”

“The term 584283 correlation comes from the formula Thompson employed to arrive at the date August 11, 3114 BC. The number 584283 is the number of days one has to count from Julian Day Number 0 to arrive at August 11, 3114 BC. The Julian Day Number System, not to be confused with the Julian Calendar, was established by Joseph Justus Scaliger in the 16th Century, specifically to correlate non-western calendar dates. In order to accommodate the most ancient calendars known at that time, he arbitrarily began the JDN count at Greenwich, at 12 o’clock noon, on January 1, 4713 B.C.”

“God commanded Moses to celebrate certain holy days on the Hebrew Calendar, and when Christ came, key events in his life occurred on those holy days. Similarly, Native American traditions claim that God created a calendar with symbolic days called the Sacred Round. The same dates in the Savior’s life also coincided with appropriate days on that calendar, so the calendars of two nations witness to his divinity. Moreover, the planets Mercury and Venus add their witness to each of these dates. In a rare calendrical alignment, this coming Easter Sunday is not only the day Venus resurrects, it is also the Savior’s birthday on the Sacred Round.”

RPMNote: The Sacred Round of the Mayan Calendar is highlighted at the top of this home page. Try out going day by day to see how this calendar works and the birthdays on various holy days.

RPMNote: This page summarizes the historical and religious dates discovered using John Pratt’s theory of significant alignments on multiple holy days on different ancient calendars. Having been eyewitness to the process John Pratt has used in this research and its utter improbility of occurring by chance, I would highly recommend a study of this work. To me, it is a powerful testimony of the Lord Jesus Christ and God’s well designed plan for this earth’s period of mortality.

It's not like it was that hard to spot this as a false prediction even in 2011.